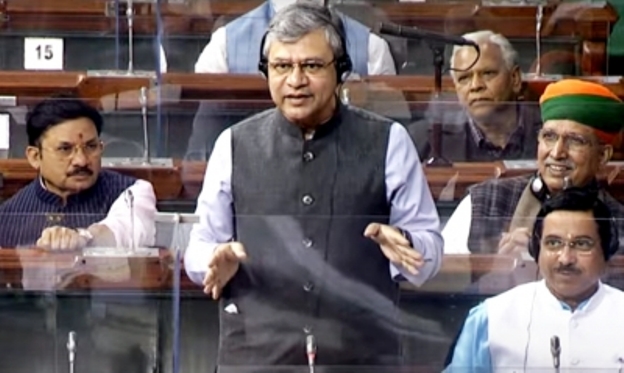 Hyderabad (IANS) : Indian Railways is planning to implement KAVACH protection system to an extent of 2,000 km during the current financial year on high density routes like New Delhi-Mumbai and New Delhi-Howrah routes, Minister for Railways, Ashwini Vaishnaw said on Friday.

“The system will be further extended to an additional 4,000 to 5,000 km from next financial year. The indigenously developed KAVACH system costs Rs 40-50 lakh for each kilometre, whereas European models cost approximately Rs 1.5-2 crore for each kilometre,” the minister elaborated.

The ‘KAVACH’ – a state of the art Automatic Train Protection system was developed by the Research Design and Standards Organisation (RDSO). South Central Railway has been closely associated with its implementation since the development stage and is facilitating trials to achieve the corporate objective of safety in train operations across Indian Railways.

KAVACH is meant to provide protection by preventing trains to pass the Signal Passing at Danger, (SPAD) (Red) and avoid collision. It activates the train breaking system automatically if the driver fails to control the train as per the speed restrictions. In addition, it prevents collision between two Locomotives equipped with functional KAVACH system.

During the development phase, KAVACH was implemented for a length of 264 km covering 25 stations across Wadi – Vikarabad – Sanath Nagar and Vikarabad – Bidar sections over South Central Railway. Later, the system has been further extended by additional 936 km, taking the cumulative deployment of Kavach to 1,200 km.

‘If Ukraine falls to Russia, Europe will falter’