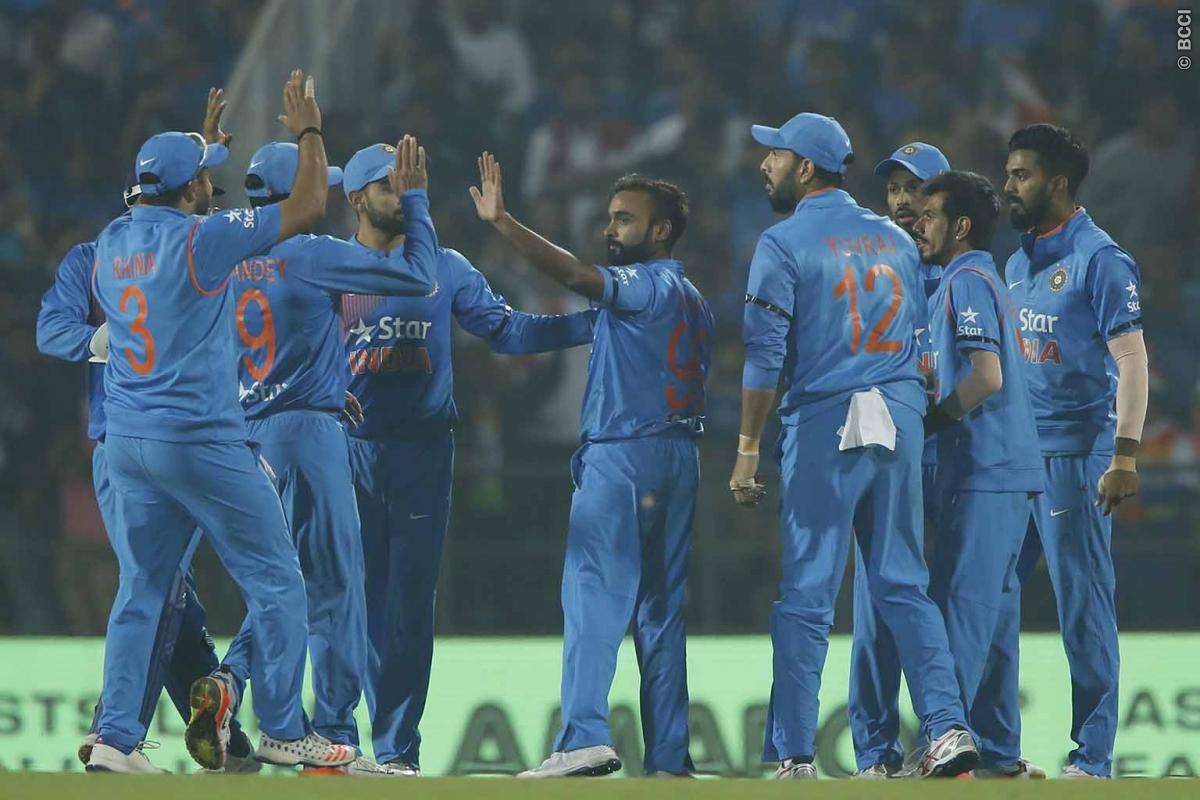 Leg-spinner Yuzvendra Chahal’s maiden five-wicket haul turned things around for India as the hosts beat England by 75 runs in the third and final Twenty20 International to clinch the series 2-1 at the M.Chinnaswamy Stadium here on Wednesday.

Kohli should have consulted BCCI, selectors before taking decision to step down as T20 captain: Kapil Dev

Chasing a mammoth 203, England were on track till the 13th over, scoring 119/2 before Chahal’s magical spell (6/25) put the visitors on the backfoot as they surrendered meekly to lose their last eight wickets for just eight runs and end on 127.

England started well with opener Jason Roy (32) and Joe Root (42) putting on 47 runs for the second wicket before Root combined with skipper Eoin Morgan (40) and added 64 runs for the third wicket to put them in a commanding position.

But thereafter it was Chahal all the way, who triggered a collapse by sending back Morgan and Root off consecutive deliveries before pacer Jasprit Bumrah (3/14) added to their woes by striking in the very next over to dismiss wicketkeeper-batsman Jos Buttler (0).

England’s batsmen were in such a hurry that it hardly took Chahal another over to take three more wickets of Ben Stokes (6), Moeen Ali (2) and Chris Jordan (0) and dash any hopes of a recovery.

Tottering at 127/9, Bumrah packed back tailender Tymal Mills (0) to seal the deal in favour of India.

As many as six English batsmen were dismissed for a duck while only three managed to reach double figures.

Raina’s 45-ball 63 helped the hosts set the tone for the massive total before southpaw Yuvraj Singh (27) and former skipper Dhoni (56) finished things off in style as India recovered from the early loss of captain Virat Kohli (2).

India were off to a dismal start losing Kohli to a silly run-out in the second over of the match before one-down Suresh Raina joined opener Lokesh Rahul (22) in the middle and the right-left duo added 61 runs for the second wicket in no time.

Raina, especially was the more aggressive of the two, as he dispatched pacer Chris Jordan for two sixes in the last over of the mandatory field restrictions.

Just when the hosts looked set for a huge total, all-rounder Ben Stokes cleaned up Rahul with a length ball after the right-hander hit two fours and a six in his 18-ball knock.

The fall of Rahul brought in Dhoni, who played a few deliveries to get used to the wicket with Raina, at the other end, taking full advantage of the dropped chance off leg-spinner Adil Rashid to bring up his career’s fourth half-century with a brilliant six off the leggie.

Raina and Dhoni continued to torment the English bowlers as India crossed the three-figure mark in the 13th over before pacer Liam Plunkett returned for a second spell to end the left-hander’s 45-ball knock, laced with two boundaries and five huge hits over the fence.

With India comfortably placed at 120/3, the stage was set for new man Yuvraj Singh (27) and Dhoni to step on the gas for a good total.

The Ranchi stumper took the mantle of the scoring, bringing up his career’s maiden T20I half-century off 32 deliveries before the Punjab southpaw showed his class to dispatch Jordan for a four and three sixes in the 18th over to take India to 177/3.

Yuvraj’s breezy innings, however, ended on the first ball of the 19th over when he misjudged a slower delivery from Mills to be caught behind by stumper Jos Buttler. His 10-ball cameo included one four and three sixes.

Yuvraj’s wicket brought in 19-year-old debutant Rishabh Pant (6 not out), who played second fiddle to Dhoni, as Jordan ended the 35-year-old’s brilliant effort on the second ball of the last over of the innings.

Dhoni, who consumed 36 deliveries for his knock, laced with five fours and two sixes, got a top edge to be caught by Rashid at short fine leg.

All-rounder Hardik Pandya (11) then added 11 runs with Pant to take India past the 200-run mark.

For the visitors, all the pacers — Mills, Jordan, Plunkett and Stokes — took one wicket apiece.