Sources said on Monday, the ultras barged into Nilakantha's house and killed him on the charge of sharing information with police about the banned outfit's activities. His body was later found in Tilak jungle under Pokharibandh reserve forest. 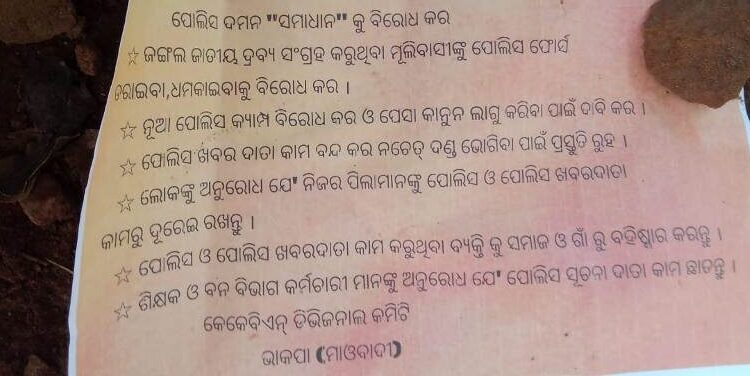 Baliguda/Tumudibandh: A youth was reportedly killed by Maoists on suspicion of being a police informer in Odisha’s Kandhamal district on Monday. The incident was reported from Kunasalu village near Tikarpaju under Baliguda police limits and the deceased was identified as Nilakantha Malik.

Sources said on Monday, the ultras barged into Nilakantha’s house and killed him on the charge of sharing information with police about the banned outfit’s activities. His body was later found in Tilak jungle under Pokharibandh reserve forest.

Following the incident, involvement of KKBN (Kandhamal-Kalahandi-Boudh-Nayagarh) division of the outlawed CPI (Maoist) came to the fore after the cadres left posters at the spot claiming responsibility for the murder.  The ultras also warned villagers of dire consequence if they chose to side with the police and act against them. They said the killing was a revenge following the death of a Maoist and detention of few others in an exchange of fire with security personnel last week.

Sources said police, on getting information about a Maoist camp, had a carried out a combing operation near Sindhi forest on Kandhamal-Kalahandi border last week and huge amount of weapons and camp materials were seized from the encounter spot.