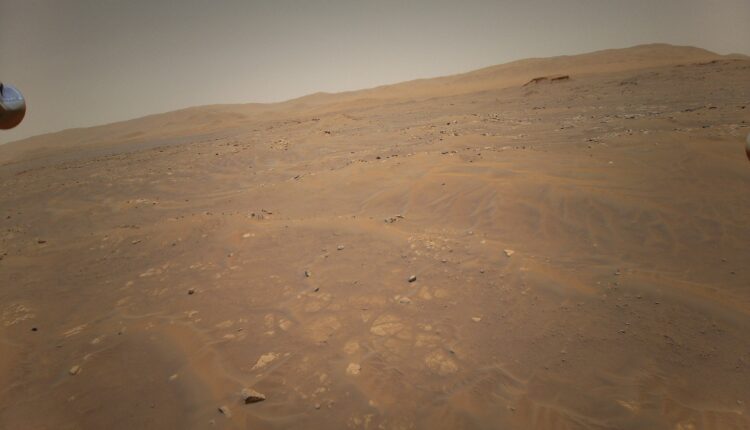 Washington: NASA’s Ingenuity Mars Helicopter has pushed its limits to successfully complete its ninth and “most challenging” flight since it first took off on the Red Planet, US space agency NASA has said.

The mini helicopter flew to the Red Planet on February 18, while being attached to the belly of NASA’s Perseverance rover.

“#MarsHelicopter pushes its Red Planet limits. The rotorcraft completed its 9th and most challenging flight yet, flying for 166.4 seconds at a speed of 5 m/s,” NASA tweeted.

“On Flight 9 we are taking things to a new level with a high-speed flight across unfriendly terrain, which will take us far away from the Perseverance rover,” NASA had said before taking the flight.

In February, Perseverance rover landed at Mars’ Jezero Crater, which harboured a big lake and a river delta in the ancient past. In early April, the little chopper deployed onto the red dirt, kicking off a month-long, five-flight campaign designed to show that aerial exploration is feasible on the Red Planet, Space.com reported.

Ingenuity aced that original technology-demonstrating mission and was rewarded with an extension, which aims to showcase the scouting potential of Mars rotorcraft. For example, the Perseverance team is looking forward to studying the photos.

During Flight 9, the mini chopper flew over a rugged region called “Seitah” — characterised by sandy ripples that is very challenging terrain for rovers and took colour images.

The terrain — with rocks and ripples, shadows and texture, and the ups and downs — challenged Ingenuity’s navigation algorithm.

“We told it that those features are all located on flat ground. That freed the algorithm from trying to work out variations in terrain height, and enabled it to concentrate on interpreting the movement of the features by the helicopter’s movements alone,” Ingenuity Chief Pilot Havard F. Grip, and Perseverance Deputy Project Scientist Ken Williford said in a blog post.

In the week ahead, Ingenuity will send back colour images that Perseverance’s scientists are looking forward to studying.

The images snapped by Ingenuity include “rock outcrops that show contacts between the major geologic units on Jezero Crater’s floor”, Grip said.

The images also include a system of fractures the Perseverance team calls “Raised Ridges”. The rover’s scientists hope to visit it in part to investigate whether an ancient subsurface habitat might be preserved there.

The self-driving six-wheeled robot Perseverance rover, last week, set for an epic journey across Jezero Crater’s floor to seek signs of ancient life. It is driving at a top speed of 120 metres per hour, NASA said.

Near to home CVC for mentally ill persons in Odisha