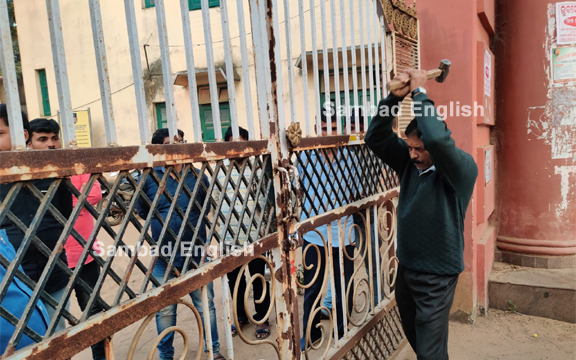 Balasore: A miscreant allegedly locked both the entry and exit gates of Balasore district collectorate in this town, today. Following which, office work was disrupted for nearly an hour.

A source said that the wrongdoer locked the two main gates in the afternoon at around 2.30 pm, reason of which has not been ascertained yet. The accused fled from the spot soon after committing the crime. However, the locks were broken open to facilitate the office work and restore normalcy.

The unidentified accused firstly locked the gate at Kutchery end. Later, he locked the main gate as well. Before anyone could notice this and take any action, he managed to give a slip.

A number of senior officials of the district were present in the collectorate as a meeting was already scheduled to be held. Some of the officials noticed that the rear gate was locked and then they came to the main gate to find it locked. The incident troubled many of them.

Balasore district Collector Dattatraya Bhausaheb Shinde was out of the collectorate and locks of the gates were broken open by the time Shinde reached the office.

On being informed, local police reached the spot and launched a probe into the incident.

Police have scrutinised the video footages of CCTVs installed nearby and quizzed some shopkeepers to extract information, a senior administrative official said.