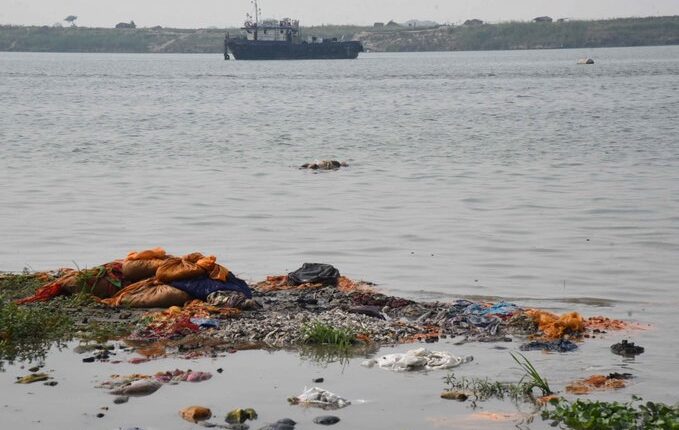 Varanasi: Seven more bodies, including a partially burnt one, have been recovered from the Ganga river in Varanasi and adjoining Chandauli district.

One body was found near Sujabad area of Varanasi and six in Dhanapur area of Chandauli district on Thursday.

People in Sujabad area, saw bodies floating on a bend and alerted the Ramnagar police, who reached the spot and divers were called to the spot.

Deputy Commissioner of Police, Kashi zone, Amit Kumar also reached the spot and monitored the search operation. Six decayed bodies and a partially burnt one were brought out and cremated.

Meanwhile, six decomposed bodies were recovered at Dhanapur in Chandauli and cremated.

Chandauli District Magistrate Sanjiv Singh said all the bodies recovered in Dhanapur were badly decomposed and appeared to have been disposed of a week ago. None of the bodies was packed in PPE kit and stones were tied to them, he added.

Divisional Commissioner Deepak Agrawal said: “We have deployed teams in villages and at cremation grounds in rural areas to tell people not to dispose of bodies in rivers and inform officials if they are incapable of cremating bodies.”

The disposal of bodies in rivers started causing ripples when corpses piled up on the Ballia-Buxar border and Ghazipur on May 10.

Bihar authorities placed a net in the river after claiming that 71 bodies had flown down from Uttar Pradesh.

The opposition has launched an attack on the state government accusing it of under-reporting Covid deaths in the state.

Samajwadi Party chief Akhilesh Yadav tweeted, “Bodies floating in the Ganges are not mere statistics, they are someone’s father, mother, brother and sister. There has to be accountability of the government that has failed its people so badly.”

Congress General Secretary Priyanka Gandhi Vadra also tweeted, “Bodies are floating in the Ganga in Ballia and Ghazipur. Reports are coming of mass burials on the banks of the river in Unnao. Official numbers from cities like Lucknow, Gorakhpur, Jhansi and Kanpur appear to be grossly under-reported.”

She demanded a judicial enquiry by a high court judge saying what is happening in Uttar Pradesh is “inhuman and criminal”. The government is busy in image-building while people are suffering, she alleged.