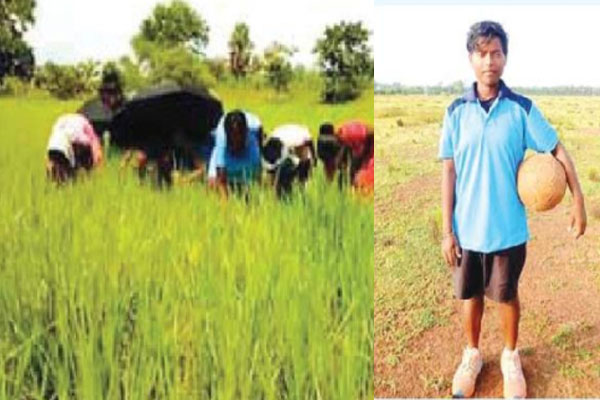 Bhubaneswar: At a time when Odisha Government claims to have taken measures to promote and develop sports with the state capital being called as the ‘Sports Capital’ of India,  a national-level football player from Jajpur district is now working hard in paddy fields to eke out a living.

Laxmi Munda, a 20-year-old tribal girl from Mangalpur village under Sukinda block in Jajpur district, who carved her name in the national-level women’s football team, now has a stagnant career due to the COVID-19 crisis.

Laxmi, who comes from an underprivileged family, had to take charge as the breadwinner for herself and her old father after her sisters’ marriage and mother’s demise. For doing so, she started working in paddy fields of people in her locality.

Apart from being a passionate footballer, Laxmi is also a meritorious student. After finishing her primary education from a village school, she got enrolled in Mahamayee High School, where she shook hands with football. She made to the block and district levels in the sport bringing laurels to her school.

She completed her Matric exam and then got admission in Bhubaneswar’s Deba Ray College. There she got an opportunity to continue her football practice. Later, for her graduation, she joined Bhuban Women’s College in Dhenkanal district with Economics honours and is currently in final year.

Laxmi has been playing football for over 10 years now. She has played more than 10 matches in several states, including Goa and Madhya Pradesh.

Before the pandemic struck her steep moving career, the 20-year-old girl took training in Bhubaneswar’s Nita Ambani Football Academy and later in Biju Patnaik Women’s Football Academy for around five months. But now she can be seen sweating out in farmlands to feed herself and her old father.

The young girl’s professor from Bhuban College Dillip Kumar Das recently talked about her struggle and hard work and said how Laxmi stood out not just as a good student but also a passionate footballer, despite all odds.

As Laxmi is working hard in paddy fields, her college authorities found out that she didn’t have a football to keep in touch with her practice. Therefore, on Thursday, the Bhuban Trupti Library provided her a football so that she could get on with her practice after work.