Naveen Babu kill me instead… 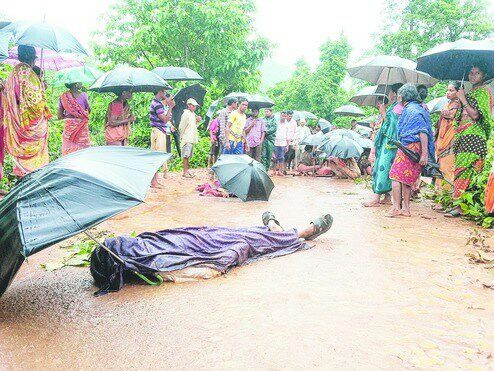 In a continuing war, the security forces cold-bloodedly shot at the said van and killed six poor Adivasi/Dalit labourers. Four others were seriously injured by the indiscriminate firing by the forces. The deceased have been identified as Kukal Digal (50), Luta Digal (25), Timari Mallick, Bringuli Mallick and Midiali Mallick (three women all aged around 40) and even a 15 months old child was shot at and killed.

The police claim that the villagers were caught in between an encounter between Maoists and security forces. The official statement was extremely insensitive with the DGP calling it ‘Collateral Damage’. However, I strongly suspect that it’s impossible for any vehicle to enter an area where an encounter is undergoing and more so for all 12 people travelling in it to get bullet injuries. There is much more to what meets the eye.

News reports say that a judicial probe of the incident has been ordered for and CM Naveen Patnaik has announced a compensation of Rs 5 lakh for the family members of the deceased. Also the administration has been ordered to offer free treatment to the injured.

I very strongly condemn this killing, just as strongly I condemn the killing of the Maoists and even of the personnel from the security forces. Murder is never a solution. It only complicates situations.

Maoist activities or any kind of armed rebellion can never be solved with gun retaliation, if ever it can be solved, it can only be solved with dialogue and honest intellectual intervention. I sincerely hope the DM, the CM, the HM and the PM realize this harsh reality.

Paying a monetary compensation is nothing but temporarily brushing the issue under the carpet. More so the compensation is public wealth and being a tax paying citizen I have the right to voice my opinion for judicious expenditure from the state exchequer.

If innocent people need to be killed for your political gains, I suggest Naveen Babu please feel free to kill me instead and I assure you that my family will not seek any monetary assistance from you. That shall be of some savings to the state.

The murder of the said six is recent and will remain in public memory till the news of the same is kept flowing. However, such murders are not the first nor will they be the last but if the same is not handled properly it would not be too far into the future when you, yes you who are reading this bit, God forbid might be a victim yourself.
The author is the Chairman of Smt Nandini Satpathy Memorial Trust (SNSMT). The views expressed in the article are solely those of the author and do not in any way represent the views of www.odishasuntimes.com