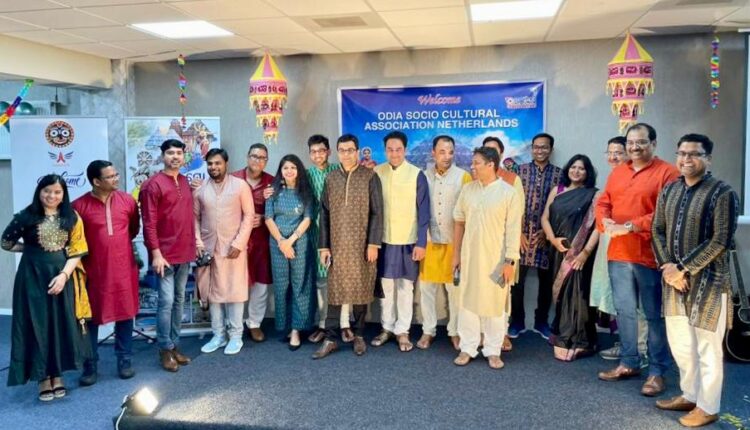 Amsterdam: The Non Resident Odias celebrated state’s most famous Raja festival with much fanfare in the European country Netherlands.

Hundreds of Odia families along with their friends, relatives and well-wishers living in different parts of Netherlands gathered at the venue to celebrate the auspicious occasion with lots of enthusiasm and enchantments. The festival was observed in a grand way after two-year Covid induced hiatus.

Addressing the participants, he showered profuse praises on OSCAN team for their noble endeavours in promoting and propagating Odisha’s rich art, vibrant culture and lofty tradition in Netherlands.

In a video message streamed during the event, Chairman of the World Odisha Society, Kishore Dwibedi lauded the efforts of OSCAN in celebrating and popularising the fairs and festivals signifying the essence and fragrance of Odisha in Europe.

The distinguished guests appreciated the social and charitable services undertaken by OSCAN in Odisha during the period of Covid pandemic and FANI cyclonic storm that had devastated the coastal part of the state in 2019. They also welcomed the series of seminars being conducted by OSCAN to impart technical and skillful training to Odia students aspiring for pursuing higher studies in Netherlands.

The highlight of the event was a colourful cultural Jamboree presented by male and female members of OSCAN along with their children. The special attractions of the spectacular extravaganza include the presentations of Mangalacharan item in Odissi dance, singing of the song titled ‘Mo Odisha’ and staging of several fun-filled competitions, fashion show and Quiz like Recital of Hulahuli, putting up of Alata, wearing of saree and getting make up.