In a unique protest, Congress activists recreated the scene of the alleged UP police's manhandling of Rahul Gandhi and Priyanka Gandhi along with other party workers. 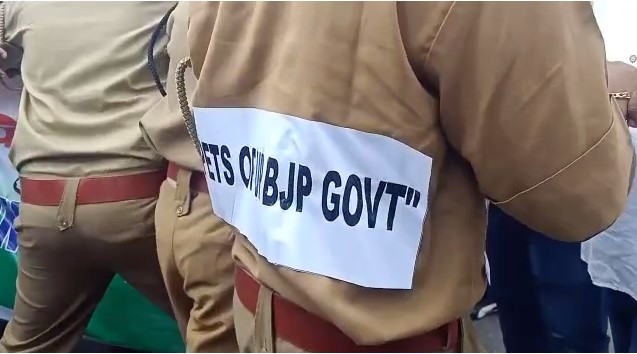 Bhubaneswar: Condemning the alleged manhandling of Congress former national president and MP Rahul Gandhi and party general secretary Priyanka Gandhi Vadra by police personnel on their way to Hathras to meet the family of gang rape victim, Odisha Congress has launched protests across the state.

Congress senior leader Suresh Routary took to streets here today alleging the high-handedness of police personnel against the party seniors leaders.  Taking a jibe at Prime Minister Narendra Modi, the senior leader said a befitting reply will be given for this misconduct.

Cong demonstrates across Odisha over crime against women

Meanwhile, in a unique protest here, members of Bhubaneswar District Congress led by Manas Chaudhary today recreated the scene of the alleged UP police’s manhandling of Rahul Gandhi and Priyanka Gandhi along with other party workers. The activists were seen wearing UP police’s uniform with ‘Pets of UP Govt’ written on it during the protest rally.

Earlier on Thursday night,  Congress leaders led by MLA Tara Prasad Bahinipati staged  a demonstration on Janpath road here protesting the incident. Burning posters of PM Modi, UP CM Yogi Adityanath and Home Minister Amit Shah, the Congress leaders demanded justice for the Hathras gang-rape victim. The party has also threatened that they would not allow any union minister into the state.