ODISHA LATEST
By Sambad English Bureau On May 29, 2016 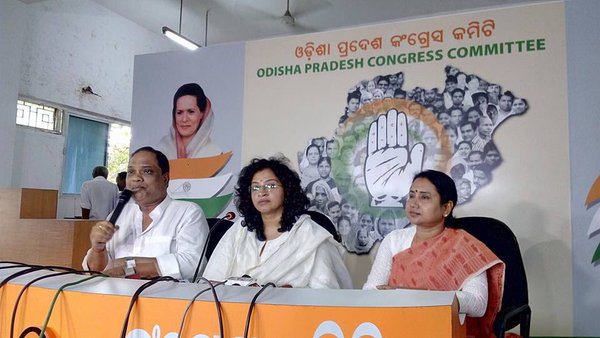 Odisha unit of Congress today launched a blistering attack on the Modi led Central Government and Naveen led State Government over their celebrations marking two years in office and termed their rule “nonsense”.

“Modi Government spends Rs 27 lakh on advertisement every day. The advertisement expense of Naveen Government is Rs 10 lakh per day. One is the elder Modi and the other one is mini Modi,” said Odisha PCC President Prasad Harichandan addressing a press conference in Bhubaneswar along with AICC Spokesperson Shobha Oza.

The party circulated a 62 page booklet titled ‘Sachhai ka Aaina’(Mirror of Reality) on the occasion to highlighting the alleged misrule of BJP led Central Government.

“In the past two years, the country saw and understood that Modi is a good event manager. His government spends Rs 27 lakh on event management every day. It is against women, farmers, dalits and tribals. It is corrupt and only knows how to rename and rerun UPA schemes,” said Oza.

She further went on to accuse that atrocities against women have recorded a 10 percent growth over the past two years and farmers facing crop loss have no better choice but to commit suicide while Modi is lying in the name of progress.

BJP and BJD, on the other hand, defended their parties and said that expenses on advertisement are necessary.

“Large scale advertisements and corruption are brainchild of Congress. We are doing our job and advertising only what we have done. Why is Congress so pained over it,” questioned Odisha BJP Spokesperson Sajjan Sharma.

“We are not doing anything wrong by advertising what we have accomplished. Are we highlighting any scheme or policy that is nonexistent? Advertisement is necessary to create public awareness about government schemes and policy. This will prevent policy hijacking,” said Excise Minister and BJD Vice President Damodar Rout.