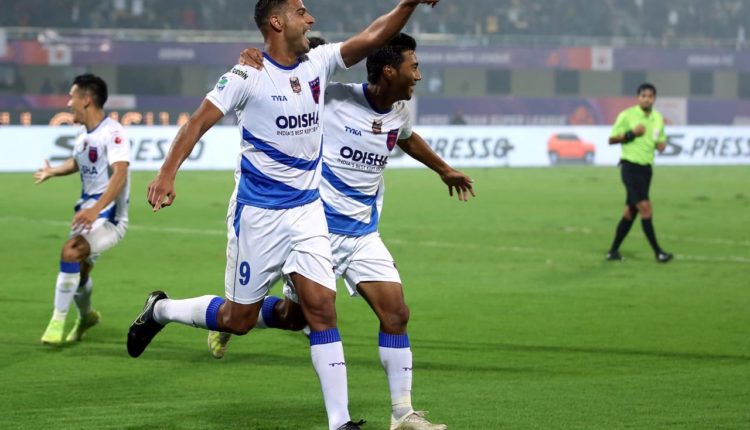 Bhubaneswar: Odisha FC got off to a winning start in their first Hero Indian Super League match at the Kalinga Stadium, edging Jamshedpur FC 2-1 on Friday.

Aridane Santana’s (28′, 45′) first-half brace ensured a conclusive lead for Odisha as Aitor Monroy’s (38′) penalty-kick went in vain for the visitors, who are now winless in their last five games.

The three points allowed Odisha to climb to the sixth spot on the table, with 12 points from 10 matches. Jamshedpur remain fourth, with 13 points.

Odisha were able to bypass the press after the visitors’ early onslaught and used their width to good effect. Nandhakumar Sekar collected a diagonal from the right and released Narayan Das who made an overlapping run down the left flank. The full-back crossed into the centre of the box and with the Jamshedpur centre-backs focused on marking Santana, Xisco Hernandez sent his header over the bar.

Both teams struggled to churn out clear-cut chances but the hosts broke the deadlock before the half hour mark. Santana nicked possession near the halfway line and flicked it to Nandhakumar. The winger dribbled forward, returned the favour and the Spaniard took a touch before slotting a neat finish past Subrata into the net.

Jamshedpur attacked in numbers and levelled the scoreline before the break. Narayan Das’ clumsy challenge on Sumeet Passi inside the box was punished by the referee and Aitor Monroy stepped up to place the ball into the bottom left corner from 12 yards.

Seconds before the half-time whistle, the hosts went ahead again in spectacular fashion. Nandhakumar crossed into the box from the left for Aridane who struck a brilliant volley into the top corner to make it 2-1.

Santana had the chance to complete his hat-trick soon after the change of ends. Nandhakumar beat his marker on the left and passed the ball to Marcos Tebar who laid it off for Santana. The striker’s right-footed effort lacked power, allowing Subrata to collect.

Jamshedpur put pressure on the Odisha defence as the second half wore on. Mobashir Rahman saw Francisco Dorronsoro off his line and attempted a long-range effort that flew over the bar.

Farukh Choudhary missed a golden chance when Narender Gahlot delivered a good cross into the box. The India international attempted a header that flew just wide, much to the dismay of the travelling fans.

The Odisha defence was able to survive the late forays into the box, thus securing a vital win for Josep Gombau at the first Hero ISL game in Bhubaneshwar.

Boys with ‘progressive gender beliefs’ less likely to be violent