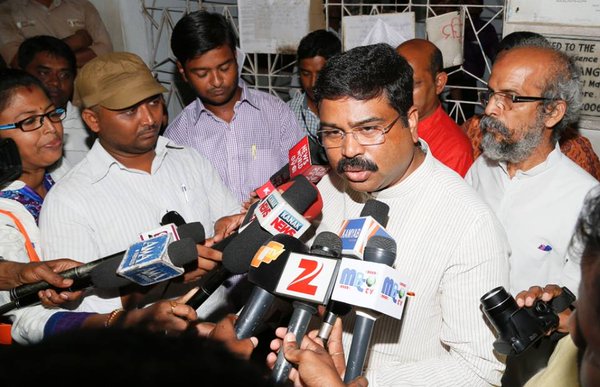 “If I analyse the performance of the 16 year rule of Naveen Patnaik Government, this is outright disappointing. Even after this long a reign by a political outfit, the people of the state are struggling for drinking water and electricity. Small investors have been denied justice in chit fund scam,” said Pradhan.

“According to the recent analysis by media, employment is the single most important issue the state is facing. The young mass is frustrated. This government is paralysed, incompetent and corrupt. I don’t believe this is what a government should boast of after being in power for 16 years,” he added.

“The allegations levelled by the Union Minister are baseless. He has raised certain issues to cite our failure. I would like to tell you that the Union Government has also failed to deliver on those points, if you go by the analysis by national media and the Supreme Court. He obviously is not going to appreciate our work as he belongs to the opposition. We don’t expect him to appreciate our work either,” said Deb.

“The Union Government made many promises to the people of the state. It was told that Odisha is going to make a lot of money from mines royalty. How much has it got so far? Nitin Gadkari promised to build highways. What happened to that? They also promised to add Odisha to the industrial corridor. What action has been taken on that front? All they have done in the past two years is cut spending in social sectors, agriculture, irrigation, women and child welfare among others. They can’t be called success,” he added.