The hackers have been using Sahoo’s Facebook accounts for last 16 days. Besides, they have made certain postings on Sahoo’s Facebook page, said a complaint lodged by the MLA with the CID-CB Superintendent of Police (SP), Cuttack, today. 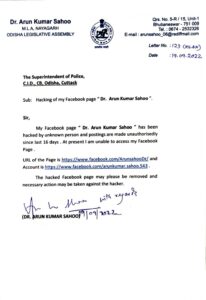 “My Facebook page ‘Dr. Arun Kumar Sahoo’ has been hacked by unknown person and postings are made unauthorisedly since last 16 days. At present, I am unable to access my Facebook page,” said Sahoo in his complaint.

Sahoo, a former minister, has urged the CB-CID SP to remove the hacked Facebook page and take appropriate action against the hackers.

Notably, the official Twitter handle of Puri district administration in Odisha had been hacked by some hackers a few days ago.

The incident came to light when an official in the Collectorate tried to post something on the official Twitter handle of Puri district administration.

Puri Collector Samarth Verma had directed the IT cell to probe the incident.