Odisha: One killed, three others injured as portion of under-construction bridge collapses 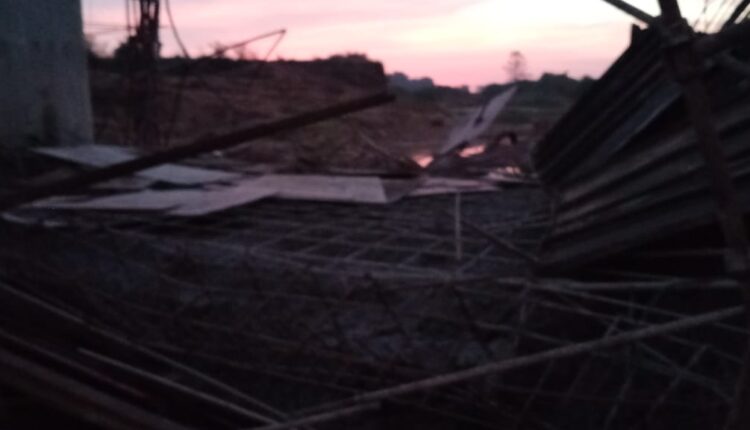 Umerkote: A portion of an under-construction bridge collapsed killing one labourer and injuring three others critically in Odisha’s Nabarangpur district today evening.

While centering work of the bridge over Nagi river was going on near Talapadar, some three kms away from Umerkote, a portion of the under-construction structure collapsed.

Four labourers working on the bridge fell down and a heap of concrete and iron rod buried them. Other labourers, who were staying near the construction site, rescued the injured and rushed them to the Umerkote hospital. One of the injured, Mahendra Mali (45) succumbed while undergoing treatment at the  hospital.

The other injured, Prakash Kandi, Ramesh Bhoi and Santosh Bhoi were shifted to the Nabarangpur District Headquarter Hospital for better treatment.

Work for the bridge, which is being constructed to connect Talapadar with Janiguda, was awarded to one Bhubaneswar-based Contractor, Asish Biswal, said sources.

After receiving information, Fire Service personnel reached the spot to find out whether more people are trapped under the debris.

The bridge is being built under the Biju Setu Yojana.

Meanwhile, Development Commissioner PK Jena directed the Nabarangpur District Collector to lodge criminal cases against the concerned Contractor, who was awarded the bridge construction work, and the Officials inspecting the work.

“I have talked to the District Collector who is proceeding to the site. Rescue efforts on. I have also asked the Collector to immediately take criminal action against contractor one Ashis Biswal and SDO and EE. Asked SE Sunabeda to rush to the site. Contractor and two- three officers will be arrested. I have instructed the Collector accordingly,” said Jena.

He further stated the EIC, who is on tour, have been asked to proceed to the site tomorrow for an enquiry.

Labourer killed, 3 critical as truck plunges into gorge in…