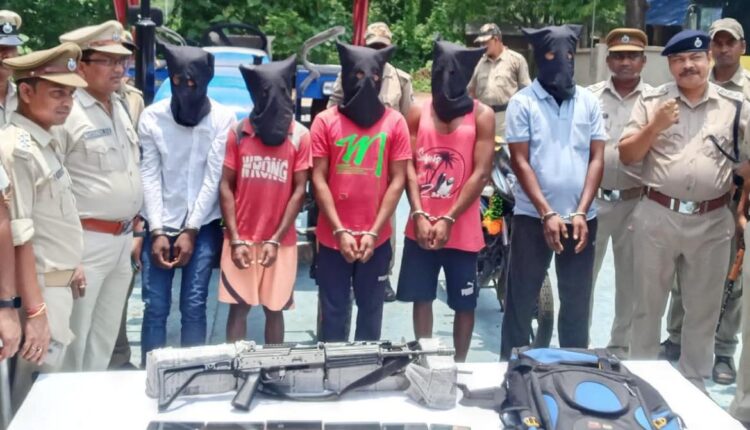 Bhubaneswar: Busting an inter-state dacoity gang, Mayurbhanj police with the help of its Keonjhar counterpart have arrested five dacoits, including four from Jharkhand and one from Odisha.

The cops also seized a INSAS excalibur rifle, 26 rounds of 5.56 mm live ammunitions, two magazine, a tractor and a motorcycle and Rs 50,000 cash and mobile phones from their possession.

During investigation, the accused persons confessed their involvement in several cases lodged with Mayurbhanj and Keonjhar police.

In the case, registered under Sections 302 and 394 of IPC, the accused persons opened fire at the victim and decamped with Rs 11 lakh cash.

“Acting on the complaint, multiple teams comprising police personnel from Mayurbhanj and Keonjhar were formed under the guidance of SPs of both the districts. The West Singhbhum police of Jharkhand extended cooperation in the investigation. On getting technical input and vital clues from local spy, we could able to ascertain the identity of the accused,” said Mayurbhanj police, adding that further investigation is underway  and efforts are afoot to nab other accused at the earliest.