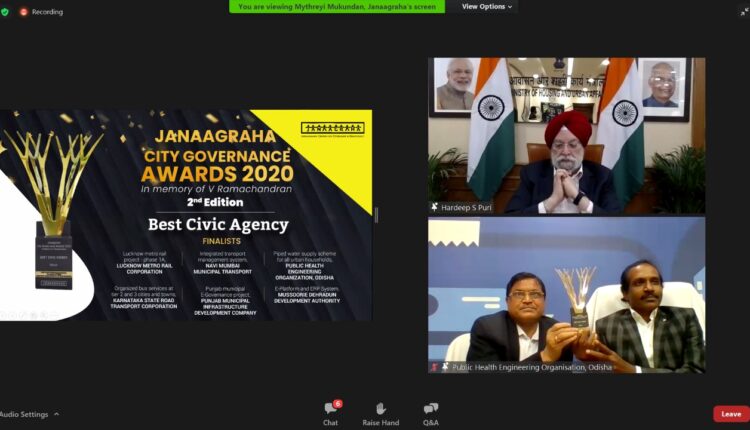 New Delhi: Odisha bagged two National awards at the second edition of the Janaagraha City Governance Awards announced today at a virtual award ceremony presided over by Union Minister for Housing and Urban Affairs, Hardeep Singh Puri. The State won in two of the five award categories competing with 54 applicants spanning across 17 States.

The Housing and Urban Development (H&UDD) won the Best State Award for JAGA Mission for enactment of laws, drafting of policies, setting up of institutional mechanisms, programmes or schemes to successfully foster urban decentralisation in the cities and State.

The JAGA Mission was selected on basis of the historic Odisha Land Rights to Slum Dwellers Act, 2017 and for transforming urban slums into liveable habitats with intensive community mobilisation and empowering slum dwellers through Slum Development Associations (SDAs). The Mission provides slum dwellers with secure tenure and access to liveable habitat with infrastructure and services and covering 3,000 slums benefiting over 1.8 million population.

The awards have been instituted in the memory of V. Ramachandran, a doyen of decentralisation, to recognize ground-breaking work in decentralisation in urban context by institutions across government.

Beware of online fraud in name of COVID-19 vaccination: DCP