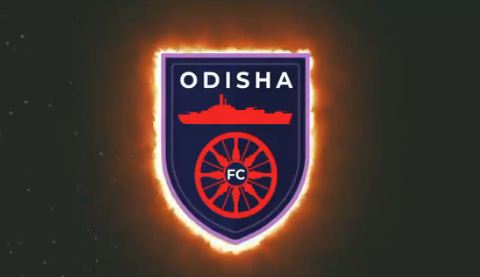 Bhubaneswar: Odisha FC, the franchise which replaces Delhi Dynamos in the upcoming edition of the Indian Super League (ISL), on Sunday tweeted a video to unveil its official logo.

The club came into existence after the signing of a memorandum of understanding last month between Delhi Soccer Private Ltd and the Odisha government.

The logo of Odisha FC embodies the heritage and the culture of the state and the vision and the ideology of its parent company, GMS.

“Delighted to share the logo of the state’s #HeroISL club @Odisha_FC which pays a heartfelt tribute to #Odisha’s rich cultural heritage. The club motto of #AmaTeamAmaGame is again a proud reminder of the state’s rich sporting culture. Wish the team all success,” tweeted Chief Minister Naveen Patnaik.

The chakra in the logo originates from the famous Konark Temple in the state. The temple is designed in the form of a chariot and these 24 chakras are its wheels, a release said.

The chakra’s position in the logo represents movement and development. The club always strives for excellence, and believes in youth power and, thus, the wheel of time sits at the crest of the logo, the statement said.

The ship represents GMS, the parent company of the club. GMS is the world’s largest buyer of ships and offshore assets.

Speaking on the occasion, Club Director Rohan Sharma said: “Our logo is the first step towards connecting with the people of Odisha. It’s a very vibrant and colourful state and the logo represents it. The Chakra in the logo is again a reflection of the rich heritage and culture of Odisha.”

Along with the logo, the club has adopted ‘Ama Team Ama Game’ as its official tagline, which translates to Our Team, Our game.

The sixth season of Indian Super League will commence from October 20 with Odisha FC playing their first match at the Kalinga Stadium on November 24.

Indians wake up to benefits of ‘desi ghee’ for stronger bones