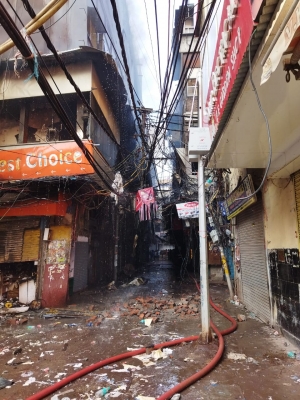 New Delhi: A massive fire that broke out in the Bhagirath Palace market in old Delhi has been brought under control, said the fire officials on Friday, adding that the cooling process was still underway.

According to Delhi Fire Service (DFS) Director Atul Garg, a call regarding fire at a shop was received around 9.20 p.m. on Thursday.

“The fire was in the shop no 1868, near Gurudwara, in the Bhagirath Palace Market. So far 40 fire tenders have been rushed to the site and no causality has been reported,” he said.

The fire subsequently spread to other shops, and around 50 shops were caught in the blaze and fire personnel are trying to control the fire from spreading further.

The narrow lanes of the locality were causing hindrances to the fire trucks to reach the incident site, said the fire official.