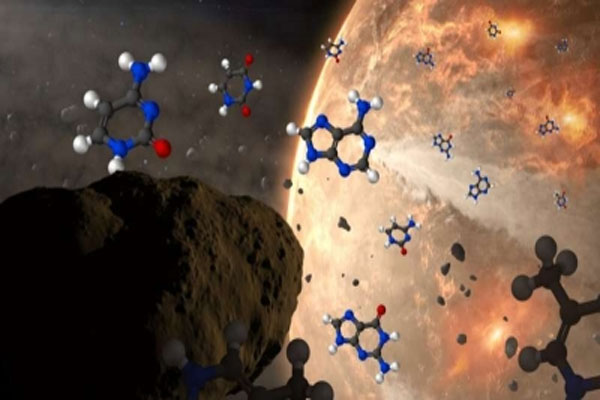 Share
Washington: Scientists have found the last two of the five informational units of DNA and RNA that had yet to be discovered in samples from meteorites.

The discovery, made by an international team along with NASA researchers, and described in the paper published in Nature Communications, provides more evidence that chemical reactions in asteroids can make some of life’s ingredients, which could have been delivered to ancient Earth by meteorite impacts or perhaps the infall of dust.

All DNA and RNA, which contains the instructions to build and operate every living being on Earth, contains five informational components, known as nucleobases – called adenine, thymine, cytosine and guanine. DNA’s sister molecule, RNA, also uses adenine, cytosine and guanine, but swaps out thymine for uracil. Until now, scientists scouring extraterrestrial samples had only found three of the five.

But, a recent analysis by a team of scientists at Hokkaido University in Japan, identified the final two nucleobases – cytosine and thymine – that have so far eluded scientists.

“We now have evidence that the complete set of nucleobases used in life today could have been available on Earth when life emerged,” said Danny Glavin, at NASA’s Goddard Space Flight Centre in Greenbelt, Maryland.

According to the researchers, cytosine and thymine have been elusive in previous analyses likely because of their more delicate structure, which may have degraded when scientists previously extracted samples.

In the earlier experiments, scientists created something of a “meteorite tea,” placing grains of meteorite in a hot bath to let the molecules on the sample extract into the solution and then analysed the molecular makeup of the extraterrestrial broth.

“We study these water extracts since they contain the good stuff, ancient organic molecules that could have been key building blocks for the origin of life on Earth,” said Glavin.

But for the new discovery: first, the team used cool water to extract the compounds instead of hot formic acid – which is very reactive and could have destroyed these fragile molecules in previous samples.

Further, more sensitive analytics were employed that could pick up on smaller amounts of these molecules.