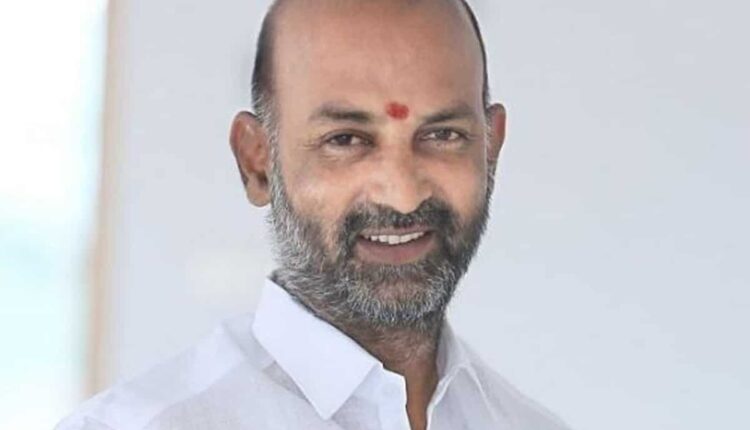 Hyderabad: Telangana BJP chief Bandi Sanjay on Friday was placed under house arrest here to prevent him from staging a protest at Jubilee Bus Station (JBS) against hike in bus fares.

Sanjay was scheduled to lead a protest by the party at JBS against the imposition of additional diesel cess by the Telangana State Road Transport Corporation (TSRTC).

Policemen were deployed around the house of Sanjay in Banjara Hills to stop him from coming out. However, the police action was in view of the possibility of Sanjay staging a protest at the Director General of Police (DGP) office against the arrest of a party leader Jitta Balakrishna Reddy.

Reddy was arrested in the wee hours of Friday near Hyderabad in connection with a case booked against him for organising a derogatory skit against Chief Minister K. Chandrasekhar Rao on Telangana Formation Day (June 2).

Sanjay, who is also a Member of Parliament, later reached JBS in Secunderabad. He interacted with bus passengers and enquired about the problems faced by them.

The BJP leader condemned his house arrest. He told reporters that the downfall of Telangana Rashtra Samithi (TRS) government has started.

The BJP leader said the TRS was acting in an undemocratic manner to stop them from raising their voice against the hike in bus fares. “The government has imposed a burden on the common man by increasing the fares and when we want to protest, the government is resorting to undemocratic means like arrests and house arrests,” he said.

Reacting to the police personnel surrounding his house, the BJP leader said the government failed to arrest rapists and criminals but it was taking action against the opposition party.

He said the TRS government has so far increased the TSRTC bus fares by 60 per cent. He slammed the government for increasing the fares five times in three years. He alleged that this is part of the conspiracy to privatise TSRTC.