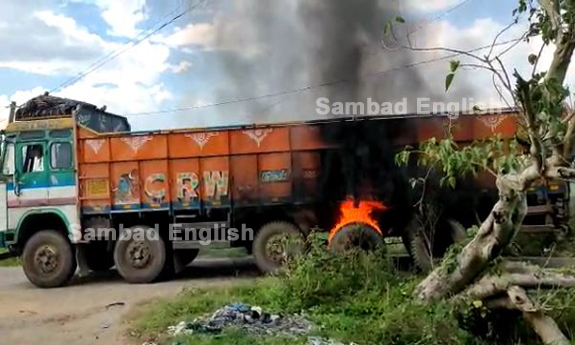 Panikoili: Owner of a truck was killed on the spot today and its driver had a narrow escape after the vehicle came in contact with a high voltage live electric wire near Singada village under Panikoili police limits in Jajpur. However, the rear wheels of the carrier truck also caught fire in the incident.

The deceased was identified as 40-year-old Suresh Das from Hatasahi village of Goleipur panchayat in the district. Suresh was raising the wire by climbing atop the cabin roof when the mishap occurred.

According to an eyewitness, the live wire was hanging low. Suresh was trying to raise it with the help of a stick-like object to help the vehicle move unhindered. The truck owner was unmindful due to which he came in contact with the wire. The driver jumped off the truck and escaped, the eyewitness stated.

On being informed, police reached the spot and launched a probe into the incident.