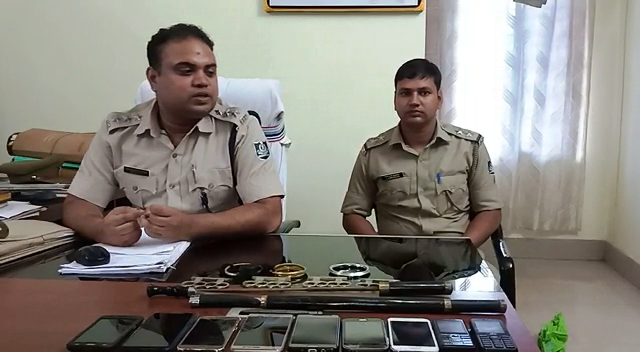 Keonjhar: In a major breakthrough, the Barbil police of Keonjhar  district arrested nine dreaded criminals of two gangs and seized huge cache of arms and ammunition in this connection today.

The cops also seized four bikes, a four-wheeler and nine mobile phones from their possessions.

Police said one Mazafar gang of Jhumpura and Titu gang of Barbil had previous enmity. Yesterday, two members of Mazafar gang had come to kill one Sunil Patra of Titu gang. After knowing this, members of Titu gang attacked the two, kidnapped them and demanded a ransom from their family members for their release.

Two police complaints in this regard were reported yesterday, following which a special team was formed to nab the accused, said the IIC of Barbil police station.

During the course of investigation, the police nabbed nine members of the two gangs and seized live bombs, arms and ammunition, four bikes, a four-wheeler and nine mobile phones from their possessions, he added.

Several cases including dacoity and murder have been pending against the nine arrested at various police stations,  the IIC added.

France to make investment in Odisha