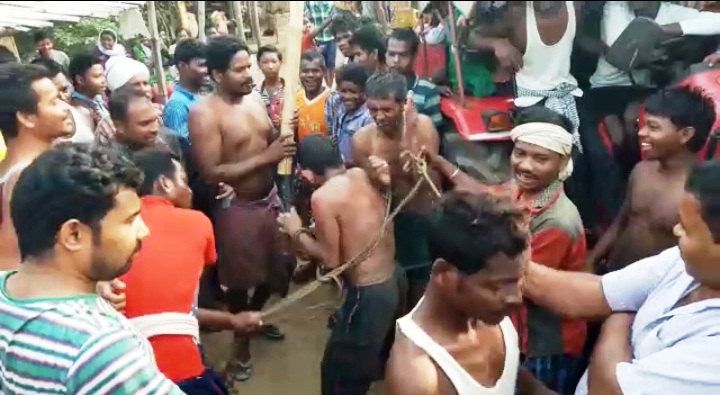 Villagers of Gangraj village under Kuliana police station limits in Odisha’s Mayurbhanj district caught three suspected child lifters while they were allegedly trying to flee after stealing a child from the village early in the morning today.

Irate villagers after tying them with ropes thrashed the trio black and blue with sticks and whatever came their way and paraded them in the village before handing them over to the police in critical condition.

Kuliana police have registered a case of kidnapping against the three and detained them.

According to reports, three youths identified as Debasish Kar, Suman Ray and Hiralal Rajguru, all hailing from West Bengal, who were working as labourers with a contractor engaged in road construction near Gangraj village were caught by the villagers while they were trying to flee after stealing the four-year-old son of one Sukura Dehury.

“He was sleeping with my nephew when they took him away. My nephew got up from his sleep and shouted that they were taking away my son. On hearing my nephew’s cries for help, the kidnappers dropped the child and were fleeing when they were nabbed by villagers,” said Padmabati, the victim’s mother.

“Out of the two kids who were sleeping, they were allegedly trying to kidnap the younger one. Villagers after rescuing the child from their clutches informed the police. Police rescued the accused persons from the villagers. We have registered a case of kidnapping at the Kuliana police station. An investigation is on and action as per law will be taken. Preliminary investigations suggest that they had ill-motive,” said Abhimanyu Nayak, SDPO Baripada.

JSW to set up steel plant in Odisha on land acquired for POSCO!

A month after love marriage, minor girl ‘killed’ in Odisha