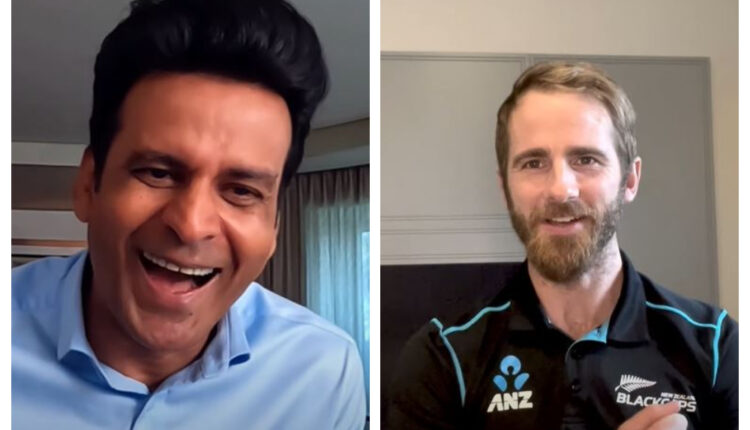 Mumbai: Manoj Bajpayee and Kane Williamson recently bonded over cricket and entertainment. The ‘Aligarh’ actor even asked the New Zealand skipper to not be “a minimum guy” and to give his best shot to every endeavour.

The two spoke in a fireside chat with regards to Prime Video’s foray into live cricket streaming. Talking about Kane, the actor said, “I played cricket in school and was excited to have the chance to speak to Kane, someone who is known the world over, not just for being a legend on the pitch but being a delightful human even off the pitch.”

He praised the cricketer for his taste in humour, as he said, “His batting style aside, I think his smile and sense of humour is infectious, and I would certainly want to share the screen with him again, if not the pitch! I am thrilled that we’ll get to watch New Zealand Cricket’s matches on Prime Video and wish Kane the best of luck for the upcoming tournaments.”

In addition, Sayani Gupta also engaged in an interesting virtual conversation from a studio in a different set up with star cricketers from New Zealand’s men and women’s teams, including Kane Williamson, Sophie Devine, Suzie Bates, Amelia Kerr, Tim Southee and Kyle Jamieson.

Both Manoj and Sayani, dug further into the teams’ strategy to face the Indian women’s and men’s team during their upcoming tours of New Zealand, scheduled in February and November 2022, respectively.

Elaborating on her conversation with the cricketers, Sayani said, “I play a cricket analyst in ‘Inside Edge’ and a journalist in ‘Four More Shots Please!’ and interacting with these amazing cricketers from New Zealand was like taking little parts of my many on-screen personas to real life.”

“As an avid cricket lover, it was a pleasure to speak to both the men and women’s teams and I wish them all the best for the upcoming season, especially as they face the Indian men and women’s cricket teams in 2022. I can’t wait to catch the action live on Prime Video,” she added.