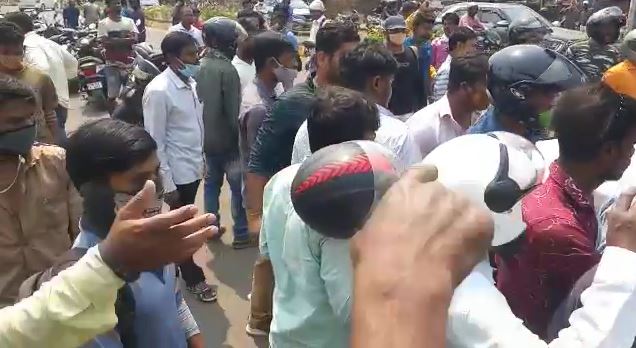 Bhubaneswar: The law and order situation seems to have deteriorated in Bhubaneswar as a youth was hacked to death in broad daylight on a busy road near CRPF Square in the city today.

The police detained two youth in this connection following the incident.

While the deceased has been identified as Tukuna Das alias Jatia, a slum dweller at Salia Sahi in Bhubaneswar, the accused duo are Sudhir Prusty and Sagar Prusty, from the same slum.

Source said that it was the locals who spotted two youth hacking another youth inside a pickup van on the road. When the attackers tried to flee the spot leaving the deceased in a pool of blood inside the vehicle, the locals caught the duo and handed over to police after calling up the PCR.

Reacting to the incident, DCP Umashankar Dash said that it is early to comment on the matter.

Detailing out the identities of accused and deceased, he said, “The trio had indulged into heated arguments earlier. Last night also the three persons had a quarrel over past enmity. Sudhir and Sagar, two siblings, brought Jatia in a vehicle today morning to the crime spot and attacked him inside the vehicle causing grievous injuries. Initially, some locals caught the attackers and beat them up on the road. After receiving information, a PCR van reached the spot and rescued the accused from the clutches of irate locals. While the police were taking the attackers in the PCR van, the locals dragged the duo from the vehicle and damaged it. The infuriated locals again beat the attackers black and blue. When additional number of police vehicles reached the spot, the attackers were rescued. They were then taken to the Capital Hospital for primary treatment. As the two accused have been admitted to the hospital, they will be interrogated on the murder case once they recover.”

DCP further said the deceased youth, Jatia, was earlier booked at the Nayapalli Police Station in connection with an assault on some people in the slum.

But the police is yet to find out the motive behind his murder. The preliminary investigation suggests that the murder took place following heated arguments among trio over past enmity, Dash added.

When asked about the matter, the deceased youth’s father, who resides at Salia Sahi, said, “My son was forcibly taken in a vehicle and killed. He had never revealed before me about his enmity with them.”

Meanwhile, a friend of Jatia residing at the slum made a startling revelation before media in the case. He alleged that Jatia was killed by Sudhir and Sagar over some intimate videos of his sister.

“I came to know about the intimate videos on 31st December, 2020, while picnicking with Jatia, the two accused brothers and some other friends at Jhumuka Deras. Jatia strongly reacted and asked Sudhir to remove the videos from his phone,” the youth told media.