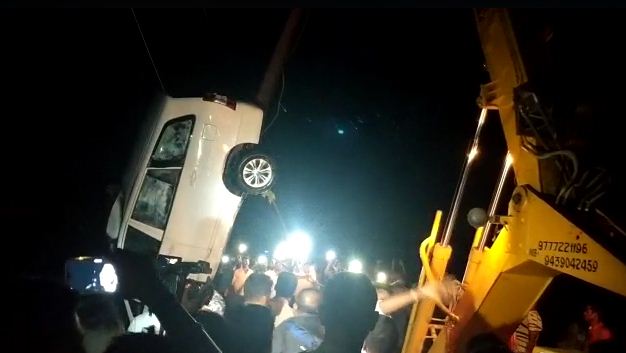 Khordha: As many as four persons died in separate road accidents in two different districts of Odisha.

In a tragic incident, two persons lost their lives after a car in which they were travelling fell off Luhasankha bridge in Jatani area of Odisha’s Khordha district late last night.

The deceased have been identified as Narendra Guru and Jitendra Nayak, both residents of Salia Sahi in Bhubaneswar.

According to reports, the duo was returning Bhubaneswar in a Toyota Innova car after watching Ganesh Mahotsav in Jatani. Around 11.45 pm, the driver of the vehicle lost control over the wheels following which it fell from the bridge into a drain.

While Narendra and Jitendra drowned, the driver, identified as Abhimanyu Behera, managed to save himself and come out of the drain, after which he sought the help of locals.

On being informed by the locals, fire personnel reached the spot and recovered the bodies from the drain. The vehicle was later dragged out of the drain using a crane.

In another incident, two persons died after a motorcycle on which they were travelling collided head-on with a Bolero SUV at Dulukibandha Chhak in Dharmagarh area of Kalahandi district.

While one of them died on the spot, another succumbed to his injuries on the way to hospital