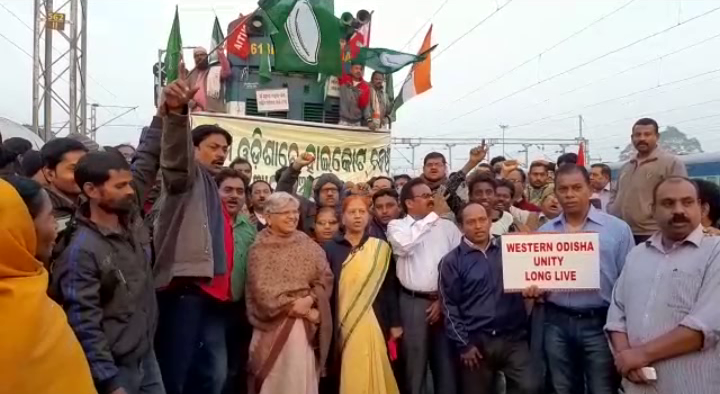 Sambalpur: The 48-hour Maha Bandh called by the Central Action Committee of All Western Odisha Bar Association demanding the establishment of a permanent High Court bench in western Odisha today disrupted the normal life in the western region of the State.

The various lawyers’ associations of different districts of the western region of the State joined the two-day shutdown to press the Centre for the permanent bench of Orissa High Court in the western part of Odisha.

The shops, educational institutions and commercial establishments remained closed due to the strike. However, emergency services like ambulance, medical, water supply have been exempted.

The rail services were disrupted by the agitating lawyers in Sambalpur. They staged ‘rail roko’ at Khetrajpur railway station halting Sambalpur-Puri and Sambalpur-Rayagada Intercity trains in the morning.

The examination scheduled to be held today at the Biju Patnaik University of Technology (BPUT) was also postponed due to the bandh.

However, the Balangir Bar Association skipped the two-day-long stir. The lawyers in the association will launch a separate protest in Balangir from December 1 to 15 to mount pressure on the government.

The lawyers intensified the protest after Centre showed no interest to listen to their long-standing demand for setting up a permanent HC bench in western Odisha.

Notably, Chief Minister Naveen Patnaik had written to the Centre three times urging it to take steps to establish the permanent HC bench in western Odisha. But, the Centre is yet to consider it.

A year after marriage, 20-year-old woman commits suicide in Odisha