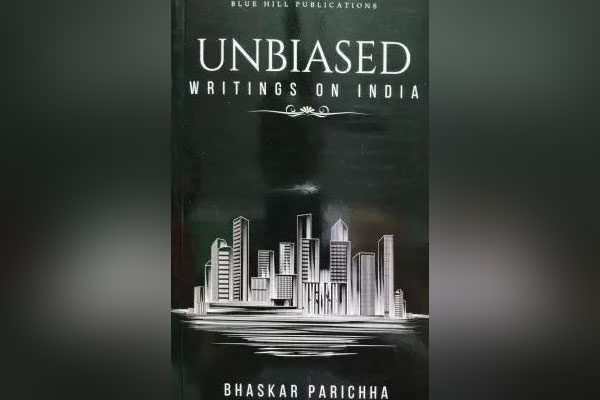 Noam Chomsky in his highly acclaimed book Manufacturing Consent (1988) had observed how mass media of US carries a system supported propaganda function to subserve the financial interests of large corporations rather than acting as the fourth pillar of democracy. In India also over the last decade most of the mass media seem to be affected by this syndrome of promoting corporate interest and indulging in biased writing. In this kind of dystopic environment Bhaskar Parichha’s “Unbiased Writings on India”, covering the decade (2010-2019) is like a breath of fresh air. Mr. Parichha cut his teeth in journalism four decades back, was Editor of News Daily, Odisha for a decade and is presently well known for his luminescent book reviews of national and international publishers, which combine objectivity with wit and candour.

The collection of 63 opinion pieces on a wide range of topics has a healthy tilt towards political events of our times, economics and most interestingly homage to five masters of cinema, music, literature and painting. The period covered 2010-19 is a metamorphic period in the life of India, as we observed the bug of Article 370 removed, the disputed area of Ayodhya given by the Supreme Court to Hindus for building a temple, surgical strike on Pakistan which kindled the fire of nationalism, as never before. In this cocktail of nationalism, make in India, and mission to the Mars, Modi has become a national Mania. Bhaskar has blissfully skirted the temptation of being a Modi Bhakt, by wearing the glasses of objectivity and using the scalpel of independent journalism skilfully. Bhaskar, has delved into the career of two colossuses of our time, Modi & Naveen. While praising Naveen Patnaik for bringing in political stability, he believes that “The internal politics of BJD seems to be a bundle of nerves.” His most tantalising piece is when he compares Modi, the Chief minister of Gujarat, with Naveen, the CM who has the longest run as Odisha’s CM. Bhaskar writes “although comparisons are odious, both the CMs have at least had one thing in common between themselves- they are bachelors. And similarities should end there.” Now that Mr Modi has embraced the national space and Naveen is the most preferred CM of India, one can safely observe that Modi’s market driven Bhagawati Growth Model is certainly less desirable than Amartya Sen’s Development Model being adapted by Naveen, as it puts a premium on women empowerment, human development & poverty reduction.

His opinion piece on “Parliament: 60 Not Out” makes an interesting reading. Despite the vicissitudes that Indian democracy has traversed, Bhaskar believes that over the past 60 years “the Parliament of India has become the mirror of our cultural variations and regional diversities”. This is in sharp contrast to what Winston Churchill had observed in 1947, “Power will go to the hands of rascals, rogues and freebooters and all Indian leaders will be of low calibre and men of straw.” While there have been instances when a few MPs have criminal antecedents, his assessment that all political leaders will be of low calibre has not been borne out by fact. The Indian parliament is a throbbing cauldron of debate, dissent and democratic discourse.

Mr Parichha has no love lost for India’s Civil services. He quotes Dale Dauten who has summed up Indian bureaucracy as “giving birth to itself and now expects maternity benefits”. Parichha believes that civil services in India suffers from politicisation with the civil services underskilled and ill-equipped to perform the required tasks. He also believes that the politicians- breaucrats-industrialist nexus is so entrenched that it requires a sustained systemic effort to cleanse the administrative system. He seems to believe that Merton’s dysfunctions in a bureaucracy is more predominant than Weber’s merit based rule driven bureaucracy.

I was particularly touched by the part of the book where he pays homage to a variety of personalities. He remembers the birth centenary of P. Sundaraya who is called “Communist Gandhi”, who took up the cause of working class with élan, ideating with linguistic states and pitched for people’s rule in Visal Andhra, winning respect and admiration of all. It’s a pity that the communist movement which struck its roots in different parts of the country with its emphasis on equity and empathy for the down trodden has withered away. He pays tribute to Nirad Mohapatra, who made the internationally acclaimed film “Maya Miriga”. He belonged to a group of brilliant filmmakers like Girish Kasaravalli, John Barua, Ketan Mehta and Manmohan Mohapatra who were fired by significant ideas and gave innovative treatment to their subjects, broke away from convention and did not become subservient to the common notion of what was good and palatable. He pays fulsome compliment to Begum Akhtar, who broke with all kind of conventions and became a queen of ghazal. He quotes Whitney Houston who wrote “when we decide to be a singer, we would be alone a lot. Loneliness comes with a life. His homage to Amrita Sher-Gil , the artist who fused western & oriental art form is touching.

He pens a wonderful obituary on Manoj Das, the master storyteller on whom Graham Green writes “he will certainly take a place on my shelf besides the stories of RK Narayan. I imagine Odisha is far away from Malgudi but there is the same quality in his stories, with perhaps an added mystery. Bhaskar believes that for thousands of men, women and children of past three generations, Manoj Das has been the very synonym of courtesy and bliss. His words have inspired countless readers and have instilled a faith in the purpose of life. With its wide leitmotiv, literary flourish and absence of bias, Bhaskar’s “Unbiased Writings on India” covers cataclysmic politics, economics and culture of the last decade, with finesse and panache. The book deserves to be read by both the dilettante and cognoscenti.