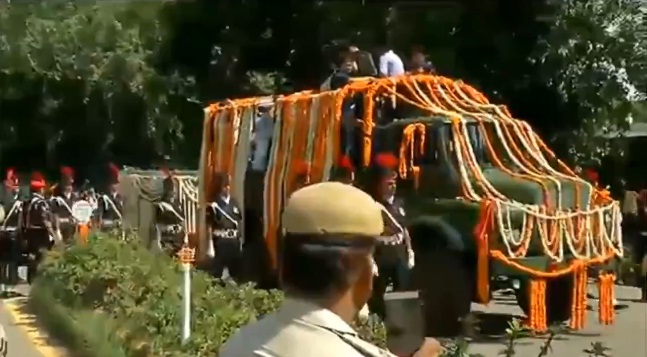 New Delhi: All the three armed forces chiefs on Friday led a host of leaders in paying homage to former Prime Minister Atal Bihari Vajpayee, whose body was lying in state at his residence.

Officers from the three armed forces draped the body in the Tricolour on Thursday before enabling leaders and people to pay their last respects at his residence in central Delhi’s Krishna Menon Marg.

Indian Navy Chief Sunil Lanba, Indian Army Chief Bipin Rawat, Indian Air Force Chief B.S. Dhanoa were among those who paid homage to the late leader who died at the age of 93 at the AIIMS on Thursday.

His body will be brought to the Bharatiya Janata Party (BJP) headquarters at 6-A Deen Dayal Upadhyay Marg at 9 a.m.

His funeral procession will begin at 1 p.m. and the last rites will be performed at 4 p.m. at Smriti Sthal.

Vajpayee was a founder member of the BJP and the first non-Congress Prime Minister to complete a full term in office. He was at the All India Institute of Medical Sciences (AIIMS) for nine weeks before he passed away. (IANS)

US condoles demise of Vajpayee

Vajpayee: A man of moderation who raised India’s…

Remembering AB Vajpayee – The ‘titan’ of…