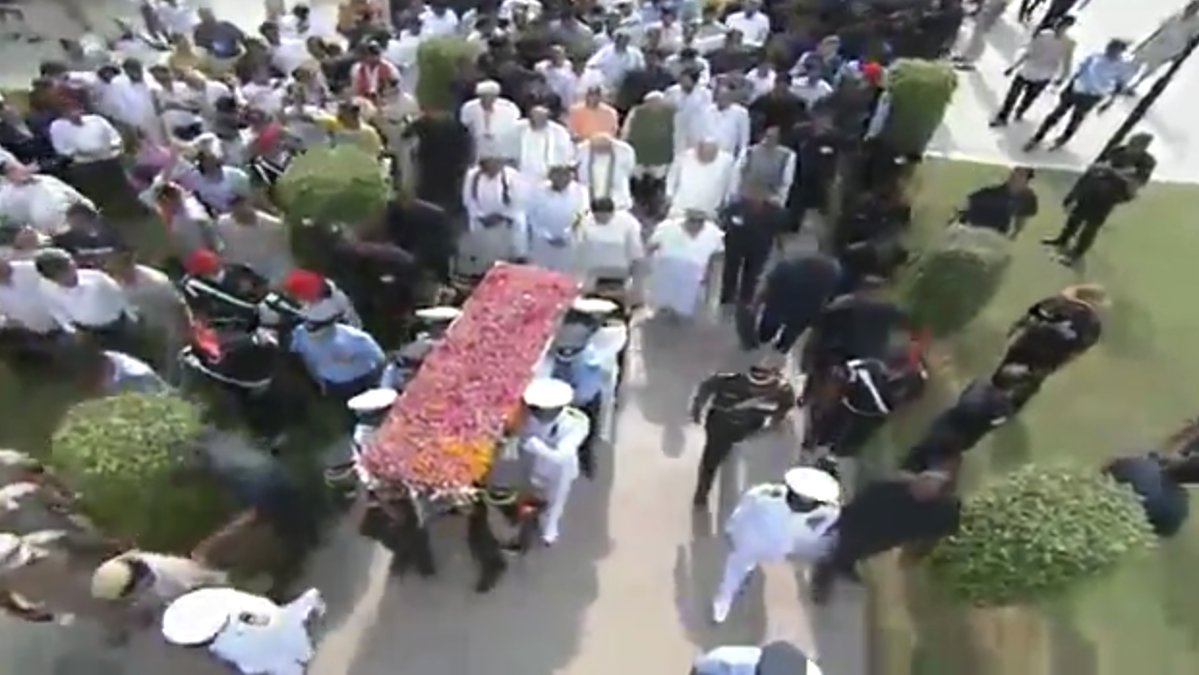 New Delhi: A sea of crowd joined the funeral procession of late Prime Minister Atal Bihari Vajpayee to bid tearful adieu to the Bharat Ratna, the tallest leader and the great poet.

He was consigned to flames at Rashtriya Smriti Sthal with full state honours. His foster daughter Namita Bhattacharya lit his funeral pyre. A gun salute was also performed along with the last rites.

The procession reached Smriti Sthal at around 3.45 pm and chiefs of three armed forces offered salutes to the body followed by the leaders paid their last respect to the departed soul.

The process for conducting last rites started at 4.00 pm. The venue witnessed leaders of different political parties and the huge crowd to pay homage to the former Prime Minister of India.

Prime Minister Narendra Modi along with BJP president Amit Shah and Home Minister Rajnath Singh was seen accompanying the vehicle carrying the coffin during the funeral procession from BJP headquarters to Smriti Sthal.

Modi hijacked the views of all as he walked from the BJP office to the funeral ground just behind the vehicle.

The leaders cutting across the party line expressed their deepest condolences over demise of Vajpayee.

It was a great loss for the BJP as its patriarch left the mortal body battling for life at the AIIMS. He breathed his last 5.05 pm on Thursday.

The final journey of Vajpayee began at around 2 p.m. — an hour behind schedule — from the BJP’s new central office on the Deen Dayal Upadhyay Marg. Modi and Shah walked behind the flower-decked gun carriage carrying the body of Vajpayee draped in the tricolour as security personnel kept a tight watch.

People from across the country, many of them teary-eyed, threw flower petals on the casket all through the three-kilometer route as an expression of their love, respect and admiration for the late leader.

It passed through some populated areas of Delhi, inclduing Bahadurshah Zafar Marg, on its way to Rashtriya Smriti Sthal, a designated spot for the last rites of Presidents, Vice Presidents and Prime Ministers.

Bhutan King Jigme Khesar Namgyel Wangchuk and British High Commissioner to India Dominic Asquith were among those who paid their tributes at the party office.

The mortal remains were kept in front of a large smiling picture of Vajpayee. A party flag had been placed on each side of the photograph.

Among those present at the party office were union ministers, chief ministers, state ministers, MPs, MLAs and BJP office-bearers.

As the casket reached the party office, people turned emotional and some of them had tears in their eyes.

Tight security arrangements had been made for the final procession by security forces anticipating participation of a large number of people.

Vajpayee, who had passed away at the AIIMS on Thursday evening, has a pan-India appeal and his flair for foreign policy and initiatives were acknowledged globally.

The country is observing a seven-day state mourning as a mark of respect for the leader who had been decorated with Bharat Ratna and was very popular. The tricolour is flying half-staff.

Vajpayee: A man of moderation who raised India’s…