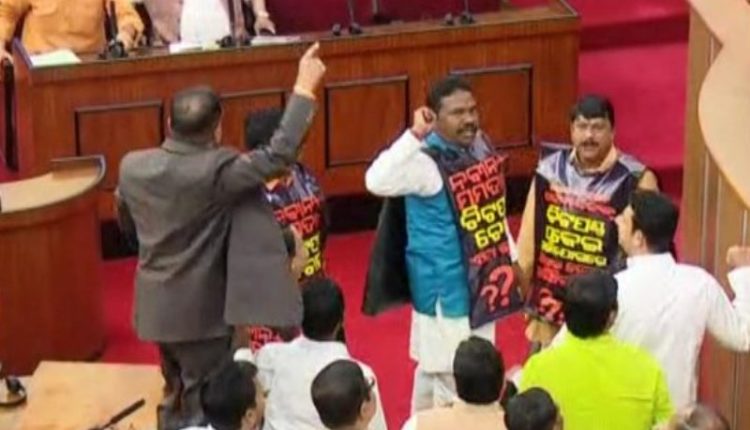 Bhubaneswar: The second day of the budget session at the Odisha Assembly began on a stormy note today with BJP legislators creating a ruckus in the House targeting Chief Minister Naveen Patnaik and his west Bengal counterpart Mamata Banerjee over chit fund scam. Similarly, opposition Congress staged protest uproar in the House over farmer issue.

Soon after the Speaker announced commencement of Question Hour following a condolence motion on the demise of Congress leader Harihar Karan, Congress and BJP legislators rushed to the well of the house and staged demonstration over farmers’ issues and chit fund scam, respectively.

Wearing black aprons, BJP MLAs targeted CM Naveen over chit fund scam and alleged that the latter is protecting the offenders. Both the opposition parties demanded cancellation of the Question Hour and discussion on both the issues.

Following this, the Speaker adjourned the House for an hour till 11.30 AM and again till 3 PM as the pandemonium continued to prevail in the House.