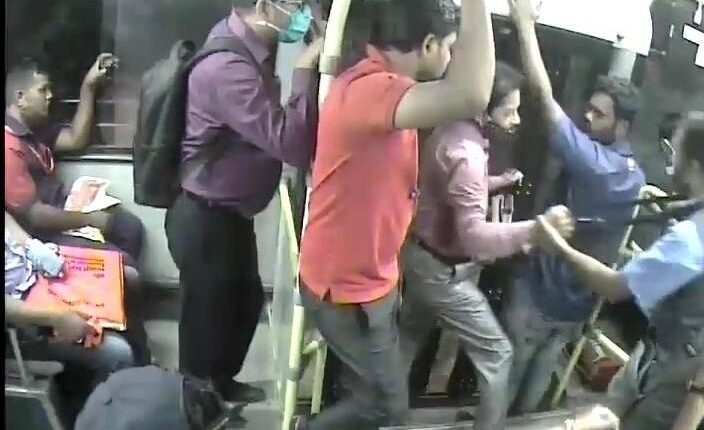 Bhubaneswar: A ‘Mo Bus’ passenger fell off a moving vehicle near Hanspal in Odisha capital last evening and sustained critical injuries. While the victim alleged that he was pushed by the ‘Mo Bus’ guide, Capital Region Urban Transport (CRUT) in a statement refuted the allegation and released a CCTV camera footage claiming that the passenger was standing close to the door of the bus before he fell down.

“As seen from the video footage, the passenger had an altercation with the guide and tried to pull him out of the bus. The passenger caught hold of the cash bag of the guide. Nowhere the MoBus staff pulled or pushed the passenger during the incident,” said CRUT in a press release.

“The passenger was destined to get down at Hanspal. The bus duly stopped at Hanspal bus stop and a woman commuter got into the bus. However, the concerned passenger continued to argue with the guide and did not get down at the stop. As he was standing very close to the door keeping his back towards it, he got stuck in the gate when the automatic door closed. The passenger tried to force open it and can be seen banging the door. It appears that somebody pressed the emergency button to help the passenger but he fell down causing alleged injury to him,” CRUT said.

CRUT has approached few of co-passengers to record their statement in order to come to the right conclusion. If any CRUT staff is found guilty, suitable and severe action will be taken, it said.

A probe into the incident has been ordered by the CRUT. The concerned CRUT staff has been taken off the duty till completion of the investigation.

The victim, identified as Nirmalendu Parida, was hospitalised after the mishap yesterday.

Mo Bus service to be limited on Diwali. Here’s…