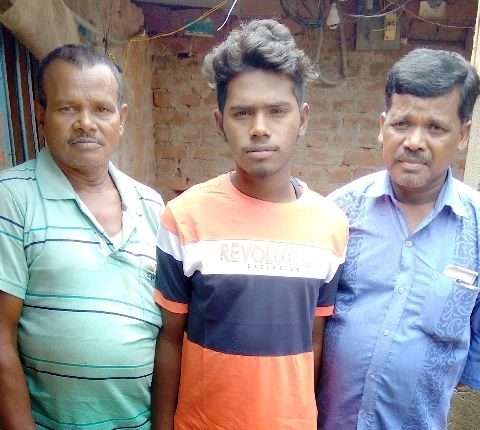 Bargarh: Joy erupted at the house of Manoranjan Dansana at Piplipali village under Paikmal police limits in Odisha’s Bargarh district yesterday as his son, who was allegedly murdered 19 months ago, returned home.

Manoranjan’s 19-year-old son Jitu had gone missing on December 7, 2016 following which his family members lodged a missing complaint with Paikmal police on December 25, 2016 after they failed to trace him.

Acting on the complaint, police had arrested Halu Gula (22) and Raghav Nayak (22) on October 22, 2017 on charges of killing Jitu. The cops had also seized Jitu’s mobile phone from the accused duo.

The two had even confessed that they murdered Jitu before looting his mobile phone and some cash and later dumped the body on the bed of Jeera river here. Jitu had gone to Bargarh town for medical check up on December 7, 2016 when Halu and Raghav attacked him.

However, as per Jitu, he became unconscious in the attack and the duo fled the spot thinking him to be dead. After gaining consciousness, he went to New Delhi where he worked in a catering firm instead of returning back home.

Jitu’s kin then informed Paikmal police about the development, following which a police team and his family members went to Kolkata and brought him back home.

According to family sources, Jitu is mentally unstable and unable to describe why he went to New Delhi and later to Kolkata instead of contacting them.

On the other hand, police said the matter will now turn into a loot case as the youth is still alive. Notably, both Halu and Raghav are out on bail now.