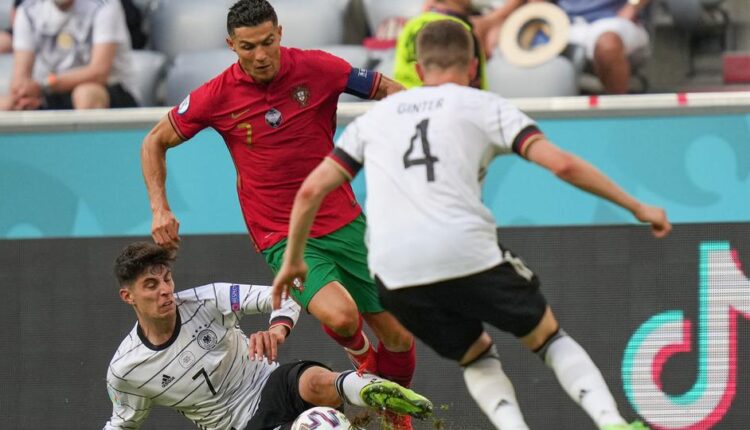 Berlin: Germany bounced back in style and overpowered defending champions Portugal in a six-goal thriller in Euro 2020 Group F at the Football Arena Munich.

The Germans came out flying on home soil on Saturday and thought they got rewarded for their powerful start, but Robin Gosens’ goal from a tight angle was flagged offside in the fifth minute, Xinhua news agency reported.

Even though Germany were dominating, it was Portugal who broke the deadlock as Cristiano Ronaldo showed no mercy and tapped home a counterattack 10 minutes later.

Despite Portugal’s opener, Germany remained unimpressed and hit back with great assistance from the Portuguese, who couldn’t put up a resistance in the 35th minute when Ruben Dias cleared Gosens’ dangerous low cross into the wrong goal to level the scores.

Germany were menacing with every attack while Portugal’s defence had its hands full as the clock ticked. The hosts eventually got rewarded for their efforts as Raphael Guerreiro accidentally diverted Joshua Kimmich’s shot across the goal into the wrong target six minutes before the break.

Low’s men could have scored more goals, but Portugal goalkeeper Rui Patricio was on guard twice to deny Gosens and Gnabry.

However, Ruiz Patricio was helpless after the restart as Germany picked up from where they had left off and made it 3-1 through Kai Havertz, who tapped in Gosens’ cutback pass from close range in the 51st minute.

Portugal weren’t able to hold the pace and had to concede another goal after Kimmich’s pinpoint cross to the far post allowed an unmarked Gosens to get his name on the scoreboards at the hour mark.

The visitors’ resistance seemed broken, but Fernando Santos’ side halved the deficit out of thin air in the 67th minute when Ronaldo curled the ball into the path of Diogo Jota, who poked home from close range.

Portugal came to life again but couldn’t do more damage as Renato Sanches’ thunder strike to the bar remained only a warning in the closing stages.

“At half time, I tried to change it, but we ended up conceding the third and fourth goals. We reduced it to 4-2; we had a ball against the post, one or two chances, but Germany also created danger. It was a fair victory for Germany,” said Portugal head coach Santos.

“Overall, a great performance by my team despite our situation. The team showed great will, we created a lot of chances and I think it is a deserved 4-2 victory,” said Germany head coach Low.

With the result, France (4 points) remain atop the standings in Group F followed by Germany (3 points), Portugal (3 points) and Hungary (1 point).

With a win over Hungary on June 23, Germany can secure their progression, while holders Portugal face a tough task with France.

Both Spain and Poland are in danger of failing to qualify for the knockout stage of the European Championships after drawing their second Group E game 1-1.

The result on Saturday leaves Spain with two points from their first two matches and the Poles with just one and both probably need to win their last group games to avoid an early exit.

Tokyo Olympics: MC Mary Kom was made to change ring dress minute before round of 16…