Bhubaneswar: Pandemonium continued to prevail in the state Assembly today as the Opposition created a ruckus in the House over farmer issues, particularly  the centralised token system in paddy procurement.

Alleging irregularity in paddy procurement, Congress MLAs, including senior leader Tara Prasad Bahinipati and Sura Routray rushed to the well of the House, shouted anti-Government slogans and climbed the Speaker’s podium. They alleged that though the paddy procurement was supposed to begin on November 15, it is yet to take off, thanks to the online token system recently introduced by the state Government.

“While some farmers have already taken their produce to Mandis, many have kept it in their houses as some Mandis have not opened. But paddy procurement has not started as farmers are yet to receive their tokens. This will lead to distress sale in coming days and administration has turned a blind eye to this,” said senior Congress leader Narasingha Mishra. 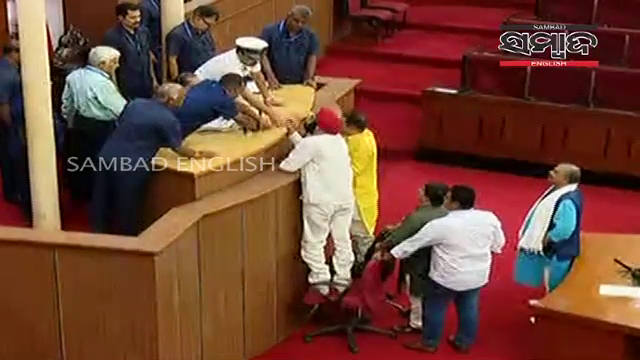 Following the protest, Speaker Surjya Narayan Patro adjourned the House till 3 PM today. Meanwhile, hundreds of farmers staged an agitation in various parts of the state protesting the token system in paddy procurement.  Irate farmers gheraoed the  Atabira Tehsil office in Bargarh district over the issue. On receiving information, Bargarh  Sub-Collector reached the place to pacify the farmers.

In reaction, Food Supplies and Consumer Welfare Minister Ranendra Pratap Swain said, “Aadhar seeding has already been done. The token system was introduced to ensure transparency in paddy procurement and help farmers sell their produce at proper price. Government will procure paddy from farmers at best prices. There is nothing to  worry.  Over 12 lakh farmers have been registered and interest of not a single farmer will be hampered.”

On the other hand, BJP legislators today boycott the state Assembly as a mark of protest over the alleged murder of woman Panchayat Executive Officer (PEO) Smitarani Biswal. Instead of attending the House proceedings, MLAs of the saffron party staged protest near the Mahatma Gandhi statue on the Assembly premises alleging that the government is shielding the culprits in the murder case.

Leader of Opposition (LoP) Pradipta Naik said, “We are not allowed to speak on any issue in the House. The state Government should clarify as to why names of four culprits in Smitarani’s murder cases have been excluded. The case should be registered under Section 302 instead of 302 of the IPC.”