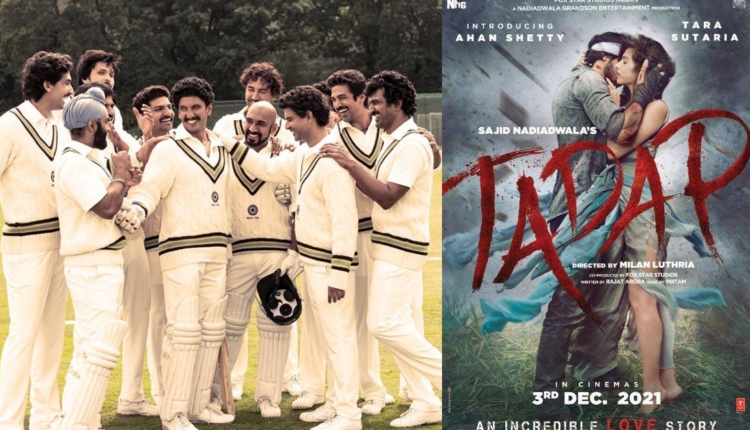 Mumbai: As soon as Maharashtra Chief Minister Uddhav Thackeray announced that all cinema halls and drama theatres in the state will reopen from October 22, a slew of Bollywood filmmakers declared the release dates of their upcoming films.

The reopening comes after 18 months after the box offices were shut in the wake of the Covid-19 pandemic plus the series of lockdowns since March 2020.

Speaking about the same, Gautam Dutta, CEO, PVR Limited told IANS: “It is heartening to see the locking of release dates by the producers of Big Ticket Bollywood movies starting this festive season and beyond in view of the recent Maharashtra government announcement for reopening of cinemas.”

He added that Hindi movies have a universal appeal in our country cutting across regions and geographies and hence crucial for the revival of the entire film exhibition industry.

“The multiplex industry thrives on a constant supply of content week on week and a clear horizon of the Hindi film pipeline will surely help to stabilize the film exhibition business”.

Alok Tandon, CEO – INOX Leisure Ltd, too welcomed the Government of Maharashtra’s decision to allow cinemas to reopen from October 22 and the announcements of release dates made by various production houses.

Talking to IANS Tandon added: “We now have both passion and content on our side to stage a remarkable comeback and entertain film lovers.”

“The emerging content line-up also augurs well for the financial health of the cinema exhibition sector, and should hasten the recovery process. We would like to assure all our guests about our safety protocol which would ensure a safe and hygienic movie watching experience.”

The second half of 2021 looks bright.

The first Bollywood big film, which is slated to hit the silver screen is Akshay Kumar-starrer ‘Sooryavanshi’. It will be released on October 22.

The next film to see the light of day in the theatres is Yash Raj Film’s ‘Bunty Aur Babli 2’. The Saif Ali Khan and Rani Mukerji-starrer and family entertainer will hit theatres on November 19, 2021. Helmed by Varun V. Sharma, the film also features Siddhant Chaturvedi and debutante actress Sharvari.

The vigilante action film ‘Satyamev Jayate 2’, which will see action hero John Abraham in a double role is locked for November 26.

Ayushmann Khurrana-Vaani Kapoor’s progressive love story ‘Chandigarh Kare Aashiqui’, which is directed by Abhishek Kapoor, is scheduled to drop on December 10 this year.

Filmmaker Sajid Nadiadwala also made an official announcement of a slate of big ticket releases including ‘Tadap – An Incredible Love Story’ featuring Ahan Shetty and Tara Sutaria on December 3.

Kabir Khan’s ’83’ featuring Ranveer Singh and Deepika Padukone is out on Christmas 2021.

Upon the reopening of the theatres in Maharashtra, Nadiadwala “welcomed” Chief Minister Uddhav Thackeray’s “historic decision”.

He added: “I am really happy for the cinema hall and multiplex owners since this decision will boost their revival. With big festivals around the corner, there couldn’t be a better time to start than Diwali.”

Allu Arjun’s Telugu film ‘Pushpa’, which revolves around the red sanders heist in the hills of Andhra Pradesh, too will release in December. The film will be clashing with Ranveer’s ’83’ on Christmas.

Actor Shahid Kapoor on Sunday announced the release date of his much awaited film ‘Jersey’. The film will be released in theatres on December 31. It is the official Hindi remake of National Award-winning Telugu film by the same name. The original film starred actor Nani.

This is not it!

Makers are optimistic as they have even released a slate for 2022 releases.

The release date for Akshay Kumar-starrer big-budget period drama film ‘Prithviraj’ has been announced as January 21.

Superstar Aamir Khan’s ‘Laal Singh Chadha’, which is an official Hindi remake of the Hollywood film ‘Forrest Gump’ will release on Valentine’s Day next year.

Ranveer’s ‘Jayeshbhai Jordaar’ is slated to hit theatres on February 25. It narrates the journey of a Gujarati man, who becomes an unlikely hero.

The second installment of ‘Bhool Bhulaiyaa’, starring Kartk Aaryan will release on March 25.

Aanand L. Rai’s ‘Raksha Bandhan’ and ‘Vikram Vedha’ remake will be released on August 11 and September 30.

Akshay’s ‘Ram Setu’ will be lighting up the screens on Diwali 2022 and closing the year 2022 will be actor Tiger Shroff’s high octane actioner ‘Ganapath’ on December 23.

Akshay Kumar to play veteran war hero in his upcoming…