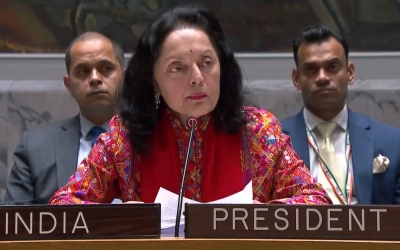 United Nations: Even as Russia and Ukraine faced off in the UN Security Council accusing each other of not wanting to settle their conflict through negotiations, India has reminded them of its call for dialogue and diplomacy and offered to support such efforts.

“India has called upon both sides to return to the path of diplomacy and dialogue, and also expressed its support for all diplomatic efforts to end the conflict,” India’s Permanent Representative Ruchira Kamboj told them in the Security Council on Tuesday.

“India stands ready to support all such efforts aimed at de-escalation,” she said pointing out that Prime Minister Narendra Modi has spoken to Presidents Vladimir Putin of Russia and Volodymyr Zelensky of Ukraine about diplomacy and dialogue.

“We believe that no solution can be arrived at the cost of innocent lives,” Kamboj said.

Without naming it, she also offered mild criticism of Russia for the attacks on civilian infrastructure in Ukraine which have crippled the electricity and water supply networks in parts the country as winter approaches.

“Reports of attacks on civilians and civilian infrastructure in the recent weeks is deeply worrying.A We reiterate our grave concerns in this regard,” she said.

Briefing the Council during the meeting presided over by Kamboj, Under-Secretary-General Martin Griffiths said” “In Ukraine today, the ability of civilians to survive is under attack.”

While the temperatures are already dipping below minus 20 degrees Celsius, “the attacks on Ukraine’s energy infrastructure, including power stations and heating plants, have left millions of people without access to heat, electricity, and water”, he said.

Russia’s Permanent Representative Vassily Nebenzia said that Moscow was taking seriously suggestions from UN members for a diplomatic solution to the conflict and was willing to hold negotiations.

But he asserted that neither Ukraine nor the Western countries were interested in a diplomatic settlement.

“We also resist the Russian strategy of buying time under the guise of apeace efforts’ to replenish its military arsenal, to build strongholds in the occupied territories and to prepare for a new attack, be it in two or five or seven years,” he said.

Nebenzia said that he is asking India as the President of the Council to convene a meeting on Friday on allegations that arms sent to Ukraine from the West are finding their way to “terrorists and bandits”.

Nigeria’s President Muhammadu Buhari said recently that the “raging war in Ukraine” was a major source of weapons and fighters for terrorists in the Lake Chad Region, but did not specify who was responsible.

Griffiths drew attention to the plight of children, and said: “Since February, 1,148 children have been killed or injured while millions have fled, been uprooted from their homes, separated from their families or put at risk of violence.

“Some 765,000 children received psycho-social support to help them deal with the distressing effects of the war and displacement.”

Kamboj said that children are “the most vulnerable to suffering, particularly in situations of armed conflict, and, therefore, need additional protection and care”.

“The conflict in Ukraine is no doubt severely impacting the 7.5 million children across Ukraine,” she said, adding that India has provided financial aid for the reconstruction of an educational institution.

“We stand ready to do more.”