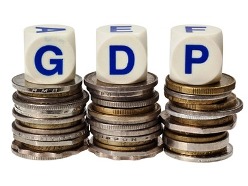 India’s gross domestic product (GDP) slowed to 7.1 per cent for the first quarter of this fiscal, from 7.5 per cent in the like period of 2015-16, due mainly to lower activity in farm, mining and construction sectors, official data showed on Wednesday.

‘No direct data available to measure impact of note…

In terms of gross value added (GVA) — considered a better measure of economic performance, as it excludes product taxes and subsidies — the growth was a tad higher at 7.3 per cent, against 7.2 per cent in the previous year, as per data released by the Central Statistics Office (CSO).

The government has targeted the GDP growth to top 8 per cent this fiscal, mainly on the back of a normal monsoon season. The growth rate of the entire previous fiscal — at 7.6 per cent — had made India the fastest expanding economy globally, overtaking China. (IANS)