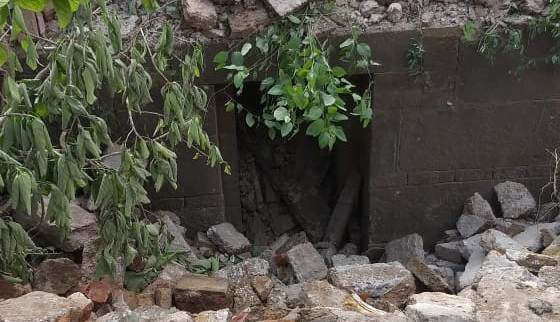 Puri: A mysterious chamber was unearthed beneath the age-old Emar Mutt during eviction drive around Srimandir in Odisha’s pilgrim town Puri today.

The underground chamber discovered at the mutt sparked curiosity among the officials as well as the onlookers gathered during the demolition process.

The secret chamber was assumed to have been used for storing precious articles of the mutt. The residents also believe that hidden treasures might be discovered from the mysterious chamber inside the mutt.

A snake helpline member, who was present during eviction, said that a large number of rats and bats was spotted inside the secret room that was 50 ft long and 12 ft dip.

With the discovery, the locals also remembered the incident when hundreds of silver ingots were discovered from the mutt in 2011.

Meanwhile, Mahanta Rajgopal Ramanuj Das is sitting inside the mutt despite repeated notice by Puri district administration requesting him to vacate the premises for eviction.

The razing of over 900-year-old mutt began in the morning in presence of district magistrate and 10 platoons of police as part of eviction drive for beautification of Srimandir.

Worth mentioning, the district administration on order by the state government launched massive eviction drive to clear all the structures adjacent to Meghnad Pacheri (boundary wall) of centuries old Srimandir.

As per the move, the structures including mutts and government offices situated within 75-metre of the wall will be demolished.

Odisha gets Rs 5933 crore from Centre for afforestation