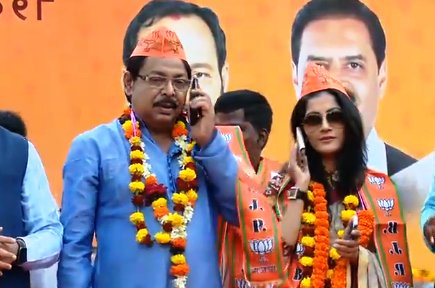 The two cine stars were formally inducted into the Saffron camp by Union Minister Dharmendra Pradhan and other senior leaders at party headquarters here on the occasion of ‘Mishran Parv’ (joining programme).

Das had joined the BJD in 2014 before the general elections and actively campaigned for the party but sources said he was later sidelined by the ruling dispensation.

The versatile actor felt he was completely moved and inspired by Prime Minister Narendra Modi’s working style and commitment for the nation building.

“It’s really wonderful and amazing to see how a man (referring to Modi) has been working relentlessly to bring change into the country. And, I feel, I can contribute little way to his mission,” Das told reporters soon after joining the party.

Anu Choudhury, who has given many hit Odia films and one of the most popular actors, said: “I am inspired by the ideology of Prime Minister Narendra Modi and I will work hard for the betterment of our State.”

Prior to Anu, several Odia actors including Sritam Das, Pinky Pradhan, Harihar Mohapatra and Ajit Das had joined the BJP.

The BJD too has its list of film stars such as Prashant Nanda, Siddhant Mohapatra, Akash Das Nayak among others.

Along with these two film stars, former BJD MLA from Satyabadi, Ramaranjan Balirsingh, who recently resigned from the BJD, joined the Saffron brigade.

“Simmering displeasure in BJD will be exposed in coming days with many leaders including ex-MLAs and senior leaders already showing their dissatisfaction,” Balirsingh claimed.