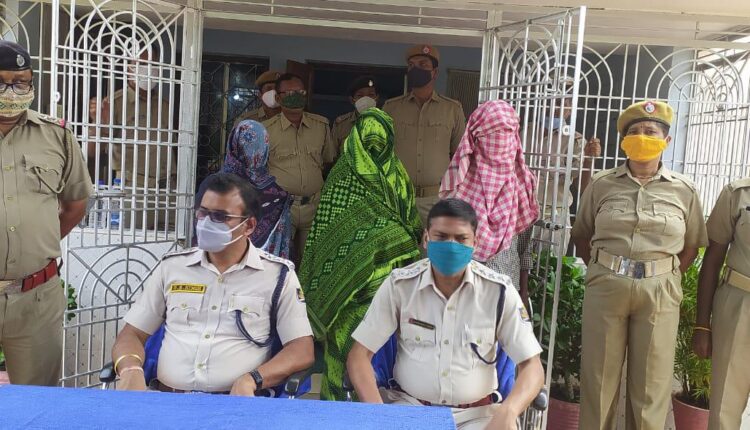 Sorada/Bhubaneswar: Cracking a youth murder case, the Aska Police of Ganjam district arrested three persons including two women and forwarded them to the court. Aska Sub Divisional Police Officer (SDPO) Umashankar Mishra revealed the murder victim’s wife, mother-in-law and father-in-law were arrested for their alleged involvement in the murder. Also, the weapon used in the murder was seized.

On June 22, a headless decomposed body was recovered from the Rusikulya river bed. The deceased was later identified as Bhagaban Naik from Gudidhepa village under Sorada police limits in the district.

Based on a complaint filed by Bhagaban’s brother after the victim went missing on June 18, the police launched an investigation and arrested the accused.

The SDPO informed Bhagaban, who married Jhili Naik from Suramani village ten years ago, used to engage in quarrel with his wife suspecting her involvement in extramarital affairs. Few days back, Jhili along with her two children stayed at a house on rent in Pushpanagar village.

The police official further stated, on June 18, Bhagaban visited the wife’s rented house in Pushpanagar to meet his children. But few moments later he again engaged in a verbal duel with his wife. Immediately Jhili informed her parents who subsequently reached Pushpanagar village.

Tired of the harassment and torture, Jhili decided to eliminate Bhagaban with the help of her parents. At around 10 PM on June 18, Jhili and her parents picked a quarrel with Bhagaban. Jhili’s father suddenly attacked Bhagaban with a scythe and cut his son-in-laws’ head.

The police official added in order to destroy evidence, the trio buried the deceased’s body and head at separate places in the Rusikulya river bed.

On June 22, foul smell emanated from the river bed following which some locals informed the local police. With the help of sniffer dogs and scientific team, the police exhumed the youth’s body from the river bed in presence of a Magistrate. Later the youth’s body was also recovered. After a thorough probe, the accused – Jhili, her father Kabiraj Naik and mother Kishori Naik – have been arrested, the SDPO informed.