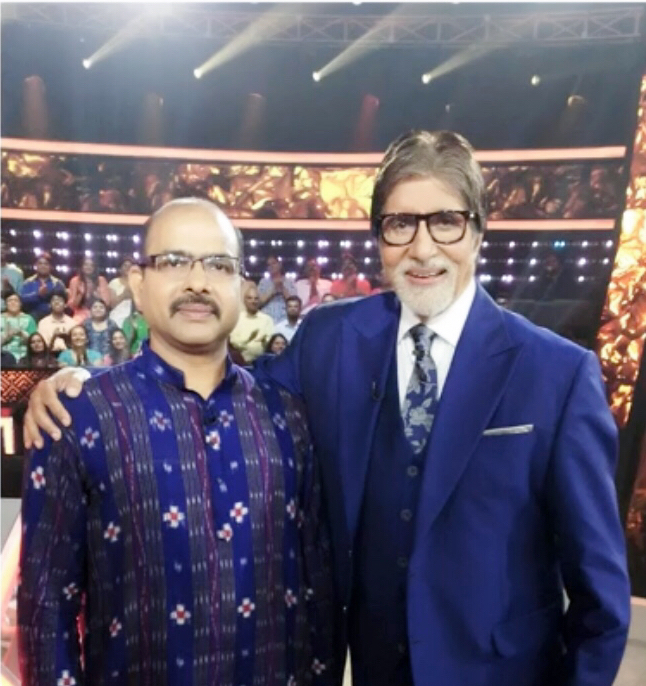 He qualified for the Fastest Finger First round and played in the studio to bag his place on the prestigious ‘Hot Seat’, right in front of India’s angry young man.

Since the programme’s telecast in 2000, Ravi Kumar has burnt candles on both ends for the last 18 years to qualify for this popular quiz and game show telecast on SONY television. He is a technician employed with NALCO and is a well-known KBC buff and Big B fan, according to his family, friends and colleagues.

Speaking exclusively to Odisha Sun Times, an elated Ravi Kumar said, “It was a dream come true. I shall cherish this memory for a lifetime as I got this golden opportunity to interact with my childhood hero. My entire family and all of my friends are rejoicing for me. I shall invest this amount in my children’s education.”

He answered 13 questions correctly by using four lifelines and bowed out at the 14th question that would have won him Rs. 50 lakhs, even though he guessed the right answer, after quitting the game.

The 47-year-old Rayagada Autonomous College alumni expressed his admiration for the Shehshah of Bollywood and even produced a scrap book of ‘Supremo’, a comic book superhero inspired by Amitabh Bachchan that he had preserved since 1982!

The Thugs of Hindostan star could not hide his amazement as long-forgotten memories resurfaced and he said that a journalist Pammi Bakshi came up with the idea to create a comic book based on him and named it ‘Supremo’. He went on to autograph a page of the scrapbook.

Ravi Kumar also revealed how preparing for KBC helped him score full marks in the General Knowledge section of his public sector examination. “My father was a regular viewer of KBC and never missed a single episode. He wanted to come on the show and meet Bachchan Sir himself. However, he passed away last year. After my studies, I wanted to support him financially and worked many jobs before I qualified for this one,” said Ravi Kumar, dressed in a Pasapali printed kurta because he believes that it is a traditional and iconic Odia attire.

He and his colleague and companion for the game, Trayalokya Nath Sahoo were seen on the show and heard deliberating in Odia, the probable answer to the 13th question that won the former Rs. 25 lakhs eventually in the tenth edition of KBC.

“I am happy that a lot of Odias are now getting the opportunity to qualify for the Fastest Finger First round. I would like to  suggest future contestants to never lose hope. Please be thorough get in with subject areas such as current affairs and general knowledge to help you reach the ‘Hot Seat’,” he said before signing off.