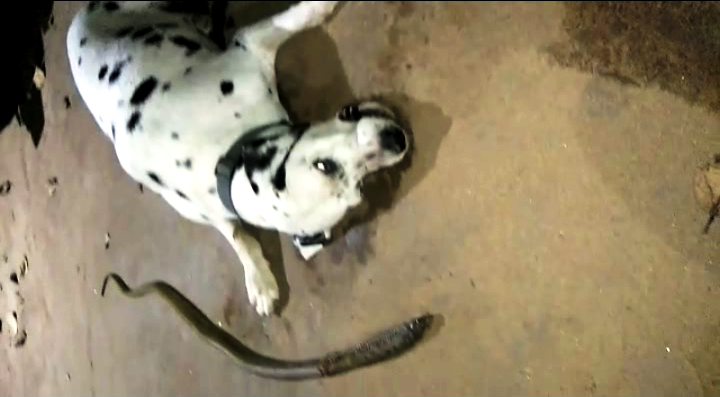 Khordha: They say dogs are the most loyal creatures on earth. And, there are examples of pet dogs sacrificing their lives to save their owners in the past. Tyson, a pet dog of a family in Jatani area here has also proved it.

Reportedly, Tyson, a Dalmatian breed dog, died after fighting an intense battle with an Indian Cobra to save his owner Arif Aman and his family late last night.

At around 2 AM, Aman’s family woke up hearing barking of the pet dog. After opening the door, the family saw Tyson preventing the poisonous snake from entering their house. Later, the two got into a furious battle. After fighting with the Indian Cobra for a while, Tyson succeeded in killing the reptile.

Sadly, after a few minutes, Tyson succumbed to injuries caused by snake bites. Aman said he called up a veterinary doctor for treatment of his pet at around 2.20 AM, but to no avail.

Meanwhile, the locals have demanded a round-the-clock treatment service at the College of Veterinary Science and Animal Husbandry of the Orissa University of Agriculture and Technology (OUAT) here.

Thunderstorm, lightning alert for these districts in Odisha today