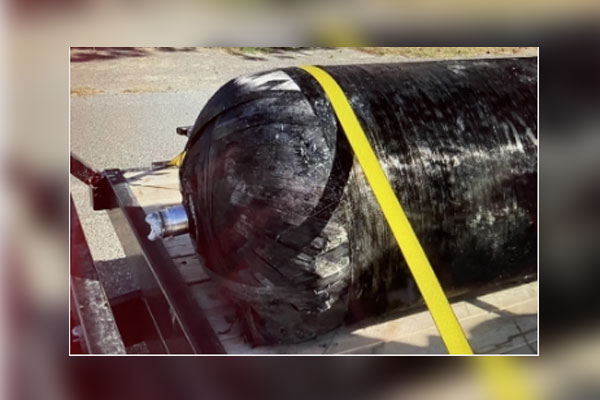 San Francisco:  In a bizarre incident, a farm owner in the US was left in shock when a pressure vessel from a SpaceX Falcon 9 rocket fell on his property in Washington State, leaving a “4-inch dent in the soil.”

In a normal course, most second-stage parts either hang out in orbit for years or re-enter Earth over the ocean.

The debris was identified as Composite-Overwrapped Pressure Vessel (COPV) from the breakup of a Falcon 9 second stage over Oregon and Washington State on March 26, reports The Verge, quoting local officials.

The stage re-entered the atmosphere in an unusual spot in the sky after sending a payload of SpaceX’s Starlink satellites to orbit.

The farm owner in Grant County, Washington State, found the pressure vessel and reported it to the Grant County Sheriff’s Office.

“Neither the property owner nor our sergeant is rocket scientist, of course, but judging from what had happened a few days prior, it looked to them like it was possibly debris from the Falcon 9 reentry,” Grant County Sheriff’s Office spokesperson Kyle Foreman was quoted as saying in the report.

A sergeant then called Elon Musk-run SpaceX, which confirmed the remnant of the rocket belonged to the company and dispatched its workers to retrieve the debris.

“Of course, we didn’t have a protocol for this, so we just erred on the side of returning someone’s property to them,” Foreman said.

A COPV is a part of Falcon 9’s second stage, the smaller section of the rocket that detaches from the main stage at the edge of space and boosts satellites farther from Earth.

The COPV stores helium at pressures of nearly 6,000psi, which is used to pressurize the second stage’s large tanks of propellant.

According to Jonathan McDowell, an astrophysicist at the Harvard-Smithsonian Center for Astrophysics, re-entries of this kind happen every couple of weeks but it is “just unusual that it happens over a densely populated area”.

Arjun Kapoor: You need to see the lows to become a better performer