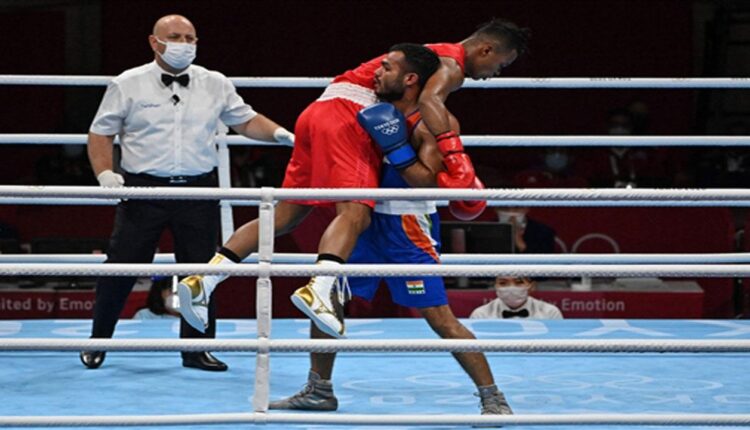 Tokyo: India’s campaign in the Tokyo Olympic boxing competition started on a dismal note as Vikas Krishan was stunned by local hopeful Sewonrets Quincy Mensah Okazawa in the opening round of the men’s 69kg on Saturday.

Krishan, the Asian Games gold medallist in 2010 and a bronze medallist in 2018, never got going as his Japanese rival maintained a steady score, getting all 10s from the five judges in the opening round. Krishan got all 9s.

Krishan, who suffered a cut below his eye in the second round, tried his best to recover lost ground in the final round but Okazawa did not give him many chances.

The 29-year-old is India’s most experienced male boxer in Tokyo as he was participating in his third Olympics. In 2018, Krishan had turned professional and moved to the United States, and won his first two pro bouts. However, he returned to India in July 2019 and started training at NIS Patiala as he wanted to participate in another Olympics and win a medal.

But Okazawa, born to a Ghanaian father and a Japanese mother, ended his Indian opponent’s dream as he made a sensational debut in the Olympics having qualified with a fifth-place finish in the 2020 Asia and Oceania qualifying tournament in Amman, Jordan. Krishan had reached the final in the same event but had to pull out due to an eye injury.

In 2018, Okazawa considered quitting the sport after graduating from university because he did not believe he would make the national team, and had received a job offer from an advertising agency.

However, he saw an opening for a job as a boxing coach at the Kagoshima Amateur Sports Association club, which would enable him to continue training and competing, so he moved to Kanoya and continued boxing and training.