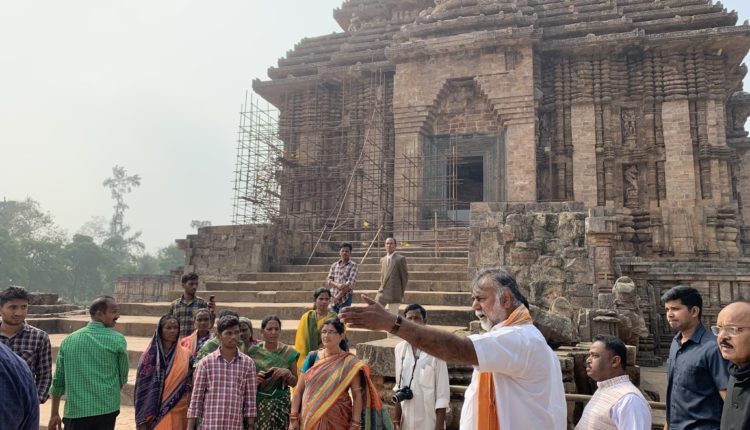 Bhubaneswar: Union minister Prahlad Singh Patel on Friday said he would take up the issues relating to conservation of the Sun Temple at Konark with ASI authorities.

The Union culture and tourism minister, who is on a two-day visit to Odisha, said that he would like to know from the Archaeological Survey of India (ASI) about the allegations of replacing sculptured stones from the walls of the 13th century Temple, also called the Black Pagoda, with plain stones.

“It is alleged that sculpted stones at the temple have been replaced by plain stones. If a replica can be made, we should not go for plain stone,” the minister told reporters at the airport here.

“Besides, there are allegations of defective drainage system in Konark. Let us examine the truth behind the allegations,” he said. The Centre will soon formulate a new tourism policy, Patel said, adding, efforts are on to explore virgin tourism destinations in Odisha.

He said that he will also review tourism development projects in Puri. “Odisha has huge tourism potential. Apart from Shree Jagannath Temple and the Sun Temple at Konark, the state houses a long coastline, forests, hills and others,” the minister said.

Apart from attending the concluding session of the National Tourism Conference at Puri-Konark marine drive, Patel will review the progress of different tourism projects in the state, an official said.

During his stay in Puri, Patel will visit Shree Jagannath Temple and Swargadwar, the divine crematorium located near sea beach in the holy town. He is also scheduled to attend a Swachh Bharat Abhiyan programme.