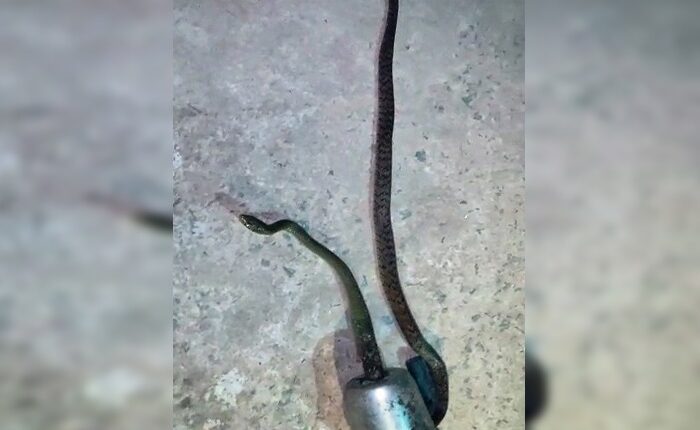 Angul:  Family members of one Nirakar Mohapatra of Bagadia village under Chhendipada block in Angul district was panic-stricken last evening after they found a giant snake stuck in a damaged mixer jar on the house premises.

Soon after spotting the 5-foot snake, Nirakar called up Snake Helpline. A member of the Snake Helpline, Himanshu Sekhar Dehury, soon reached the spot and identified it as Indian Rat Snake. The reptile had major injuries on its stomach as it was struck in a hole of the steel mixer jar for a long time and  tried to slither through it.

The snake-catcher immediately called Snake Helpline Secretary Subhendu Mallick for necessary advice and later managed to rescue the snake safely by cutting the jar. Since no veterinary hospital was open in the night, Dehury provided preliminary treatment to the snake.

This morning, the injured snake was taken to a nearby veterinary hospital and later to the Veterinary Science and Animal Husbandry of OUAT  in Bhubaneswar for treatment.

Ayushmann is UNICEF India advocate to end violence against children