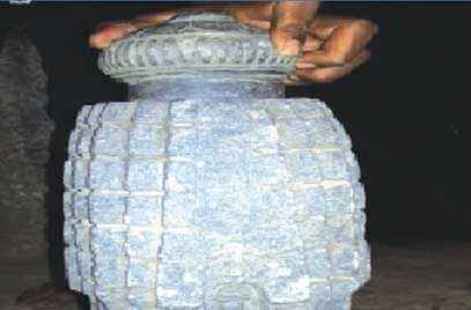 Jajpur: A rare ancient miniature shrine was unearthed inside a pond at Badachana block of Jajpur district in Odisha increasing the enthusiasm among the researchers for further study on the sculpture.

The temple was discovered during renovation work of a 400-year-old ancient pond near Kanakeswar Mahadev temple at Khaera village under Badachana block in the coastal district.

The temple, which was discovered inside the pond, is assumed to be a replica of temple.

This is a replica of temple, said eminent sculptor Maheswar Ojha.

According to reports, as the pond was buried for long years it was causing inconveniences for the villagers. After including the pond under the government’s pond renovation programme, it was excavated in the past 15 days.

After excavating upto 15-ft deep of the pond to remove muck, a rare temple made of black Muguni stone was discovered from the ground.

The idols of lord Budhha were carved in the 2-ft high temple.

Along with the shrine, ancient stone diyas were also discovered from the site.

More fact will come to fore if research will be conducted on the rare tiny temple, said Khaera Sarpanch Harapriya Baral.