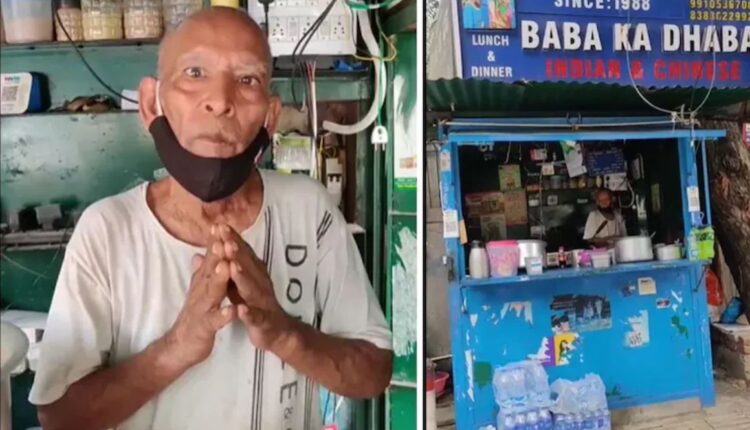 Prasad was admitted to Safdarjung Hospital in Delhi.

The cops were notified by the hospital authorities that a man who attempted suicide has arrived at the hospital.

“Police rushed to the spot and found that he is Kanta Prasad. He is currently undergoing treatment. His wife informed the police that he had been depressed for the last few days,” a senior police officer said.

Prasad’s wife said that the couple had to close down their new restaurant and return to their old stall by the roadside in South Delhi’s Malviya Nagar area as the operation costs of the restaurant far exceeded their monthly income.

Last year, YouTuber Gaurav Wasan had shared a video in which Prasad was seen shedding tears, while saying he has two sons and a daughter, but no one helps.

Prasad also said he and his wife cook and sell food at the dhaba throughout the day. The video became so viral on social media that Baba’s (Prasad) fate changed overnight.

Soon, a large number of people had come forward to help him and long queues were witnessed outside the dhaba. People were seen eager to click photographs with him.

Later, with the financial help Prasad received, he opened a new restaurant of his own, in which two chefs were also hired.

Talking to IANS, Azad, the 32-year-old son of Kanta Prasad, said: “About 4 months ago the restaurant was closed, as less number of people were turning up. Earning was very less in proportion to the expenses. Rent, salary of staff, electricity and water bills also had to be paid.”

“More than Rs 1.5 lakh was spent to open the restaurant and after it was closed, all the goods were sold for around Rs 30-40,000. My father had never left the dhaba… a rumour was spread that Baba had left but he was, is and will be at the dhaba. Currently, only a few people are coming to the dhaba.”

According to him, the monthly expenditure to run the restaurant was around Rs 2 lakh while earnings were only Rs 15,000.

Gave no permission to Rhea to visit morgue, BMC to Maha…